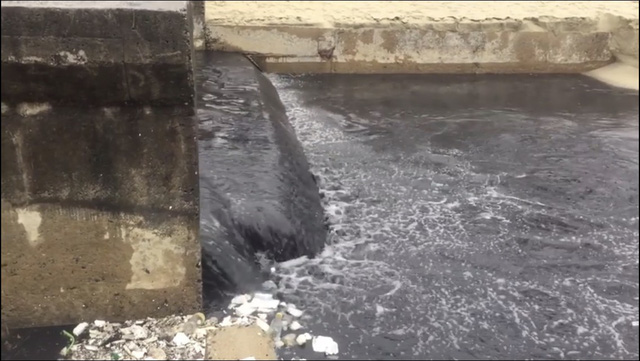 A well-known beach in Da Nang was plagued for several days by raw foul-smelling murky sewage pouring into the sea after excessive runoff had overloaded local wastewater treatment facilities.

Dark water flew from drains along Vo Nguyen Giap Street facing the My Khe Beach after rain over the recent two days in the central city, sending its revolting odor wafting in the vicinity.

The unpleasant situation occurs every summer, with the discharge in large streams washing sand on the beach away into the sea, according Ha, a beverage vendor in the area.

She said the wastewater retained its distinctive inkiness even after fusing with the blue sea. “The water is so disgusting that no one wants to take a bath at the beach. Customers were afraid to arrive, so my business has been in the doldrums so far.”

The liquid disposed of at several discharge points was seen to have deposited a layer of black mud on its way across the beach to the sea. The cause is that sewage and runoff share a network of pipes, said Mai Ma, director of a water treatment company in Da Nang.

He clarified that water from an incessant, torrential rain disgorges into sewage systems positioned along the My Khe Beach, which usually handle only household and factory waste, with the result that their walls are overflowed.

The provisional remedy, he supposed, is cleaning up the beach’s affected portions, filtering the discharge for large organic waste objects, increasing the number of water pumps, and filling the hollow traces left by the waste stream with sand to preserve the tourist destination’s beauty.

But the long-term solution must involve separating the systems of sewage treatment and runoff, he added.

Wastewater pipes should be put underground as they reach the sea so that the landscape is not spoilt, suggested a leader in the city.