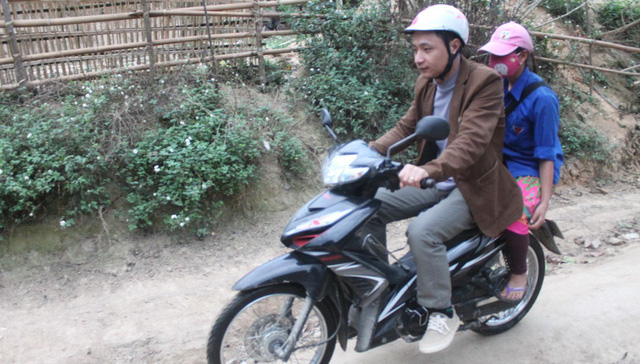 Teachers in north-central Vietnam have crossed long distances during the past several months to arrive at the houses of students in a mountain hinterland who have not re-attended class, in the hope of bringing them back to school.

When Vietnam’s Lunar New Year – the largest national holiday in a year – approached, students from Muong Ly Middle School, a boarding school for ethnic-minority children in a border area of Thanh Hoa Province, left classrooms for their homes to enjoy family reunion.

But many of them have not returned to school, chiefly because their poverty-stricken parents forced them to get married at a tender age or work in the fields with their family.

“The old-fashioned customs of underage marriage have tenaciously clung on to the lives of the Hmong people here.”

Quy is amongst many teachers who have traveled nearly 20 kilometers on mountain dirt roads to give potential dropouts another opportunity to education.

Along the way, he usually caught his students walking to the fields with their parents or playing around in their village.

He stopped the motorbike and asked them questions.

“I really want to go to school, but my parents asked me to stop to grow rice, because the family is poor,” she said.

“They also said Hmong girls of 16 or 17 years of age have to get married or they’ll be left on the shelf,” she added.

“My family’s still in great difficulty. Dua’s three elder sisters are all married, and her younger brother only studies in grade 4. She has to work with me for a living,” Su said to Hoang Trong An – another teacher in the outreach-like initiative.

“If she studies too much, she’ll end up single all whole life,” she continued.

“Her arms are still very weak, unable to hold a machete to cut plants or a hoe to break earth. You should think about her future, let her go to school, in the future she may become a teacher, doctor or factory worker,” An told the mother while holding Dua’s hand.

The mother agreed on the strength of his advice and then began packing a bag with her daughter’s clothes.

“I allow you to go to the school with your teacher. Try to study well to benefit our village,” she said to Dua.

Brimming with joy, the daughter climbed on An’s motorcycle, heading toward the school.

The government has provided some assistance to ethnic-minority and financially disadvantaged students at Muong Ly Middle School in an effort to improve education in remote regions.

He added that students who attend school late after the Lunar New Year will learn on the weekend to help them keep pace with their peers.

​In Vietnam, father of alleged torture victim accuses teacher of lying about abuse