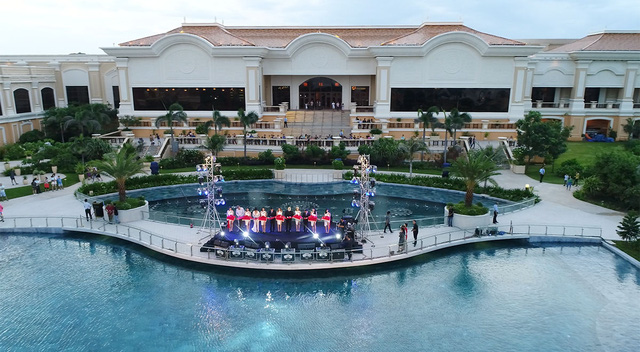 A resort developer in the southern Vietnamese province of Ba Ria-Vung Tau has raised confusion and doubt with its persistence to build a private airport right beside a garbage burial site.

Ho Tram Project Company (HTP), the developer of the Ho Tram Strip, plans to develop a ‘special purpose’ airport located 15 kilometers away from its resort complex to attract more visitors, thus contributing to the province’s economic and tourism growth.

Ho Tram Strip is a group of integrated resorts, spanning more than 161 hectares of land along two kilometers of pristine beach in Ba Ria-Vung Tau.

According to Lam Quy, deputy general director of HTP, having an airport to help visitors travel to the resort much easier is crucial to the development of the whole complex.

“The distance from Tan Son Nhat International Airport in Ho Chi Minh City to Ho Tram is too far, and this inconvenience explains why we receive only around 300,000-400,000 visitors a year,” Quy complained.

The resort is located some 115km, at least a two-hour drive, from the Ho Chi Minh City airdrome.

Quy also asserted that Harbinger Capital Partners, the major shareholder of ACDL which wholly owns HTP, has been committed to investing in the airport construction.

However, it turns out that HTP wants to develop the airport at a location only 150-500 meters away from an under-construction landfill project.

If really implemented, the airport will also occupy a small area of agricultural land, according to Ba Ria-Vung Tau authorities.

Nguyen Van Trinh, chairman of the provincial People’s Committee, has required a re-evaluation on the location of the proposed airport construction, as well as a detailed assessment of its possible impact on the local neighborhood.

On Thursday, Le Quoc Tuan, the provincial deputy chairman, also suggested that the resort developer consider another location for the airport, as the foul odor from the garbage burial site may affect its operations in the future.

The province’s administration advised that the airport be developed in Loc An, a commune in Dat Do District, some 14 kilometers from Ho Tram Strip. But the recommendation faced objection from the Ba Ria-Vung Tau transport department.

Even though Loc An is already included in the list of areas zoned for airport development by the Ministry of Transport, an official from the transport department said it would be unreasonable to build an airdrome there.

The official explained that the commune is only 60 kilometers from Long Thanh District of the neighboring province of Dong Nai, where a megaproject to build the Long Thanh International Airport is already underway.

Ba Ria-Vung Tau also has plans to upgrade its military airport of Go Gang into a dual-purpose terminal, so “it does not make sense if [the province] has two airports while the Long Thanh International Airport is located not too far away,” he told Tuoi Tre (Youth) newspaper.

Despite the suggestion from the provincial administrators, HTP insists on developing the airport at the place of its choice, saying its corporate parent is losing patience after having been waiting for the plan to be carried out over the last two years.

“The foul smell of the landfill will only have a small impact on the airport,” Quy said. “We will be fully responsible if anything goes wrong with the plan.”

The statement Vietnam’s largest fuel wholesaler, Petrolimex, made earlier this week that its VND388 billion (US$18.3 million) pre-tax profit in the first half of this year is modest, has angered experts and consumers

111 people killed, missing due to floods in central Vietnam since October