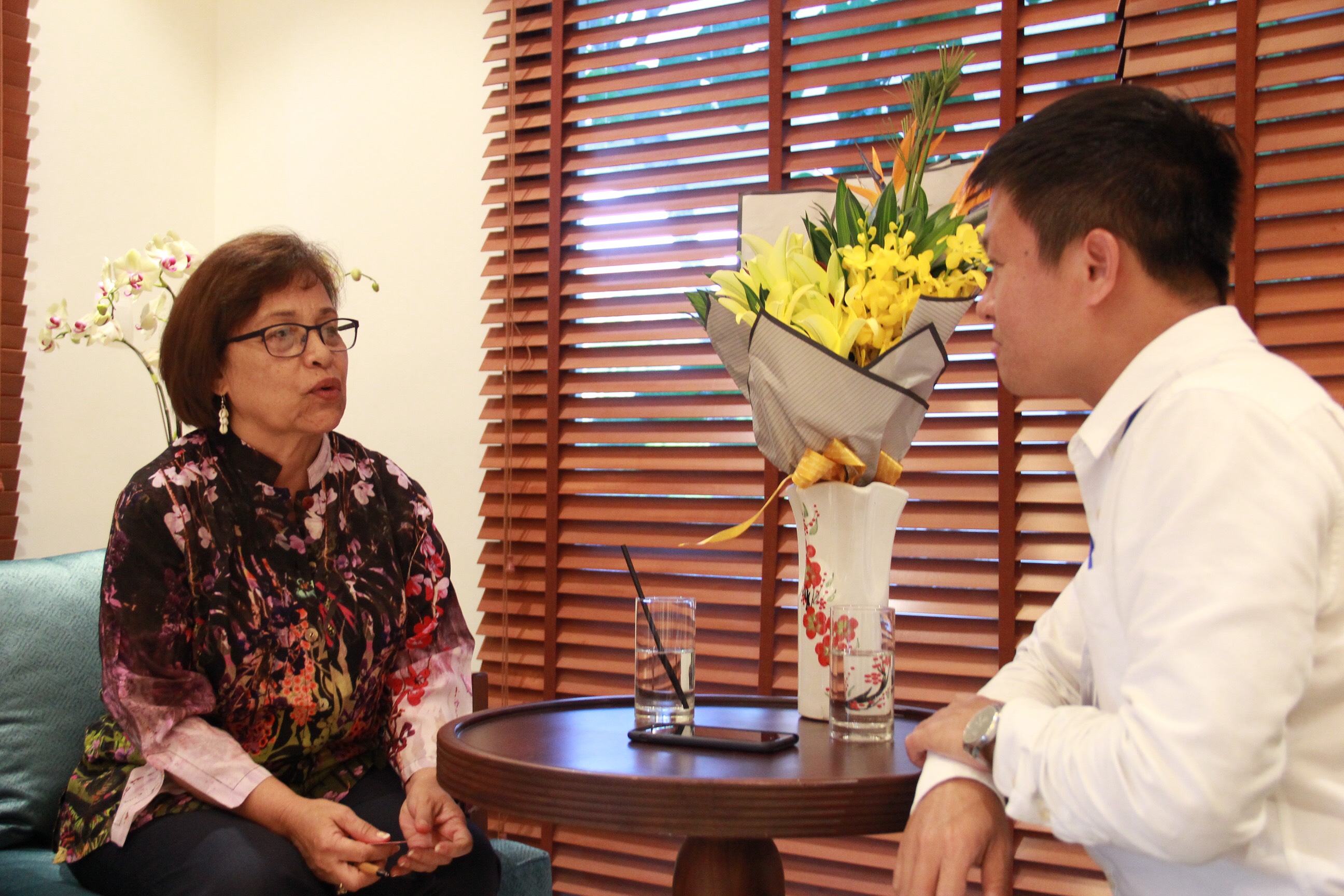 Marshall Islands President Hilda Heine has asserted that Vietnam, as a founding member of the Climate Vulnerable Forum (CVF), plays a strategic part in the bloc, a global partnership of countries disproportionately affected by the consequences of global warming.

Heine made the statement in an exclusive interview with Tuoi Tre News on the sidelines of the week-long sixth meeting of the Global Environment Facility Assembly (GEF 6) in the central Vietnamese city of Da Nang on Wednesday.

The leader of the Oceanian country also held talks with Vietnam’s Prime Minister Nguyen Xuan Phuc earlier the same day, as part of her agenda in Da Nang.

Heine announced on Wednesday that the CVF is slated to hold a first-ever online summit between leaders of its 48 member countries in November to build increased support for the safeguard of those most vulnerable to growing climate change dangers.

The government-level conference will be held entirely online as a first ‘virtual summit’ of global political leaders to promote inclusive dialogue, while also contributing to eliminating emissions as there is no need for cross-continent travel, according to the Marshall Islands leader.

Why is the summit significant for countries vulnerable to climate change?

The CVF has never gathered in full before at the level of heads of state and government.

Leaders have participated in small numbers in different CVF events over the years, but our Forum’s High Level Meeting involving mainly ministers called for a summit in order to make the highest level contribution we could.

We are told by scientists that time is fast running out to limit warming to 1.5 degrees, which we need to protect the Marshall Islands from disappearance.

All vulnerable nations will be far more affected with such temperatures. The whole world will bear the brunt.

So we need to start building a new wave of political support for more action.

It’s not enough to have national commitments that add up to three or more degrees of warming. We all need to do more.

The CVF Summit is our moment, it’s the chance for vulnerable countries to speak out and attract global attention to our cause for doing more, for solidarity.

Why did you decide to organize an online summit this November?

I come from a small country. We don’t have many resources.

We don’t even have many hotels to accommodate delegates from member countries; so we have to be innovative.

I think an online summit is the way we use technology to bring people together.

When we travel from country to country, we of course add to the issues of climate change.

So it’s important to do it differently and to think outside of the box.

What role can Vietnam play in CVF?

Vietnam is a founding member of the CVF, attending even the first meeting in The Maldives in 2009 ahead of the Copenhagen process. It has actively participated in the key meetings since this time.

Vietnam has a great strategic role to play as a Forum member – it is a leading middle-income economy in Southeast Asia.

What Vietnam says and does will influence what happens across the region.

The support and solidarity of Vietnam with the vulnerable countries in the CVF has been crucial to the success of the Forum in getting its agenda considered and addressed.

This clearly occurred with the Paris Agreement when all countries came on board for working towards 1.5 degrees.

I was pleased that the Prime Minister of Vietnam confirmed to me today that he plans to participate in the Summit this November.

How confident is the CVF that powerful countries will support the summit?

We are very confident that the world will rally to our cause.

I joined the G7 meeting in Canada recently and have had a chance to discuss the Summit already with several leaders, like [French President] Emmanuel Macron, who has said he will join.

We have received messages of support from other major economies like the Netherlands. As vulnerable countries we are reaching out our hand. We are confident that others will join us. Global cooperation is essential to dealing with climate change since no one country can address it alone, not even China or the U.S.

Understanding each other’s perspective is critical to such cooperation. We are inviting all leaders to join if they are prepared to indicate doing more to help protect the vulnerable from climate threats by 2020.

What kind of contribution should smaller countries expect from industrialized countries?

As smaller countries, we are looking at all ways in which we could accelerate climate action and do more with very limited resources.

We are expecting major industrialized economies to, at minimum, do the same. We know that it’s sometimes more complicated with very large economies to effect change, but their capacity is also much greater, and their responsibility also.

Every nation needs to act and developed countries have long committed to lead. We need to see countries big and small rolling up their sleeves and finding more ambition to act, and we need them to do that before 2020 so that we can be sure to keep the Paris Agreement on track to fulfill its goals.