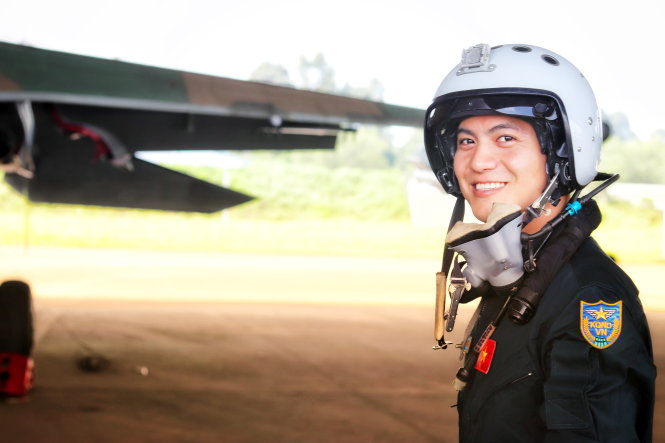 Lieutenant Le Ba Sang, a 26-year-old aviation officer, remains one of the outstanding pilots of Regiment 935 of the Vietnam Air Force as he was one of the few in the course chosen to practice with real bombs and ammunition during his training.

Flying the Su-30MK2 is all military aviators’ dream, and Sang is no exception.

As it is an advanced attack aircraft, one needs experience and thorough understanding in order to fly it.

While many pilots remain unfamiliar with the aircraft despite their desire to enter its cockpit, Sang first flew the plane at the age of 23, when he was one of the youngest members of his unit.

Despite being one of the ten youngest pilot trainees to fly the Su-30MK2, Sang has already accumulated over 400 hours of flight on three different planes, including trainer aircraft Yak-52, high-performance jet trainer aircraft L-39, and multi-role fighter aircraft Su-30MK2.

Sang is also one of the five most outstanding trainees who were allowed to practice with real bombs and bullets at the training school last March and May.

“The weather on that day was not good,” Sang recalled the first time when he practiced bombing with real weapons on the Su-30MK2.

“After I released the bombs, officers on the ground said I hit the target.

“When I landed, I received many congratulations from on-the-ground engineers.

“It was such a good feeling that I cannot describe it.”

The young pilot was ranked with recognition for the training.

Two months later, his school held a bombing and rocket shooting training session, and the young pilot was chosen again.

“This time we were dropping bombs in the sea, while older aviators practiced with rockets,” Sang said.

The young lieutenant has also received certificates of excellence from the military, adding to a long list of impressive achievements for an aviator who has even not finished his training course yet.

Dream to become a military aviator

Sang was born in the north-central province of Thanh Hoa, but he grew up in a house located near an airport in the south-central city of Nha Trang.

His father was an engineering teacher at the Air Force Officer Training School.

When Sang was in grades 2 and 3, his father took him on the cargo aircraft An-26 from Nha Trang to Thanh Hoa to celebrate the Lunar New Year.

“The feeling of being up in the air looking down was very novel and exciting,” he recalled.

Having grown up near the airport, Sang was well accustomed to the sound of planes.

“Every time I saw the jet trainer aircraft L-29 and training aircraft Yak-52, I wished one day I could fly such a plane,” Sang said.

“Back then I was only interested in flying, not as passionate as I am now,” said the young aviator.

“In order for a pilot to be able to practice flying an actual plane, he needs to score at least seven [out of ten] on theory tests.”

The theory lessons cover a wide range of aviation knowledge on different types of aircraft, airport and flying regulations, safety guarantee, and navigation skills, among others.

After two years of studying in the classroom, Sang was qualified to practice with the trainer aircraft Yak-52 with an accompanying instructor.

April 11, 2013 was a special day for Sang, as it was the first day he steered a plane all by himself. Only two other trainees were eligible for individual practice.

“When I was on the ground I was really worried but the moment I started the engine, anxiety was gone,” Sang recalled.

“My dad also came to see me flying for the first time,” Sang said, adding he felt really proud and confident after safely landing the plane.

After finishing his practice with the trainer plane Yak-52, the outstanding trainee was chosen for jet trainer aircraft L-39 training.

After graduating from the Air Force Training School, Lieutenant Le Ba Sang was assigned to Regiment 935, where he was chosen to train with the Su-30MK2.

“Flying a Su-30MK2 is a lot more difficult than with the Yak-52 and L-39, but because I had accumulated quite a lot of flying hours, it was easier for me to get used to the plane,” Sang said.

As the Su-30MK2 is currently the best fighter jet of Vietnam’s military, flying it requires pilots to have a thorough understanding of both its technicalities and functions.

Since it was designed to protect the country, it is far-reaching and supplied with a lot of weapons, which aviators are required to be able to use, according to Sang.

As the Su-30MK2 is a complicated aircraft that requires pilots to have an extensive understanding, Sang would not be able to fly it without his eagerness to learn.

Not only does the young lieutenant constantly expand his understanding, he also makes sure he understands everything perfectly.

After finishing the required classes, he would go around and ask more experienced aviation officers about anything he does not understand thoroughly.

It is apparent that he is passionate about his profession.

Even though evenings are usually time spent for relaxation, Sang spends it studying and researching.

“To pilots, studying is a lifelong process instead of just a few years because it is a dangerous profession.

“Even the tiniest mistakes can lead to fatal consequences, so having a proper understanding is very important,” the young aviator said wisely while admitting he is still too young and has a lot to learn.