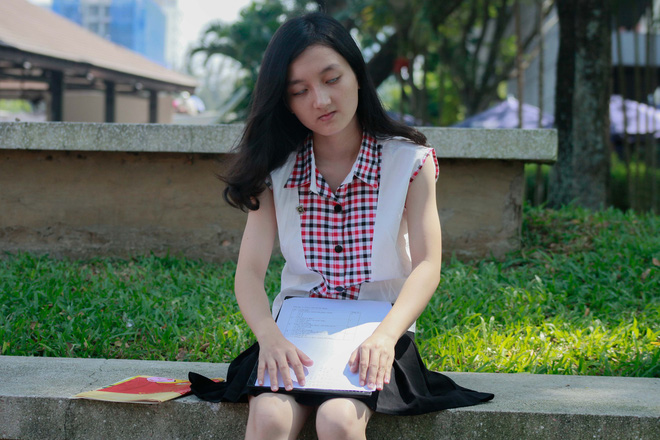 Nguyen Thanh Vinh received a scholarship worth nearly VND1 billion (US$43,000) for a three-year bachelor’s degree at District 7-based RMIT University Vietnam, where all subjects are taught in English with no assistants or translations.

Vinh was born without sight in Ninh Thuan Province in south-central Vietnam, a mountainous area with no schools or opportunities for the disabled.

Even though she has never seen her surroundings, Vinh’s love for life is infectious.

Her passion, desire, and determination have allowed her to overcome everything the world has thrown her way in order to earn this year’s only scholarship awarded by the Australian university.

Vinh’s mother passed away when she was still a child.  Her father, who is also visually impaired, works as farmer to make ends meet for her and her two siblings.

Vinh had long desired to attend school like her peers, but that notion seemed pretty farfetched in the rural area she grew up in.

To help Vinh realize her dream, her father spent six years visiting school after school asking to have her admitted, only to have his requests rejected, with many school admitting that they lacked the resources, knowledge, and equipment to teach a visually impaired student.

The constant rejection didn’t discourage Vinh. Instead, she learned Braille – a tactile alphabet for the hearing impaired – with the help of her siblings and radio lessons.

By 2009, her father’s efforts finally paid off when she was put in contact with Thien An, a charity organization that teaches and provides for the visually impaired in Ho Chi Minh City.

In just two years she was able to complete her entire primary education, three years faster than the standard curricula designed by the education ministry.

Shortly after, she was admitted to Center for Continuing Education of Tan Phu District where she finished high school with ordinary students.

High school was a real challenge for Vinh, as most science-based subjects were taught with graphs and drawings on the board.

As Vinh could only listen to the teachers’ voice and lectures, she was often unable to follow the lessons.

Despite this, Vinh won the ‘excellent student’ title annually during her seven years spent at the center.

“I can feel infinite positive energy from Vinh,” Bao Ngoc, one of Vinh’s classmates, shared.

“When she faces difficulties, she never takes a step back or allows herself to become discouraged.

“Her attitude has greatly affected me and helped me become more keen on my studies and determined in life.”

Not only does she hold an extremely positive attitude towards life, Vinh also faces all problems head-on, an attitude she says she inherited from her father.

“Speaking of difficulties, I am sure that my father has had many more to face than I did, but he still lives happily and encourages us to maintain a positive attitude towards life,” Vinh said.

“I believe that if we are not born in the best circumstances, the only way out is to face our difficulties.”

Inspired by her own difficulties in learning with ordinary children during secondary school, Vinh, along with three other friends, developed a project on teaching methods for teachers working with classes of visually impaired students.

In 2017, Vinh and her friends attended a UNICEF program which sponsors and supports social projects designed by youth. Beating 60 other competitors, Vinh’s team became one of the five winners to receive UNICEF sponsorship.

This achievement was among Vinh’s main advantages in landing her full scholarship to RMIT.

While working on the project, Vinh realized there are many English documents regarding teaching methods for visually impaired children, so she was determined to study translation at the university.

“With this job, at first, I will be able to find myself a job which can allow me to support myself and my family,” she shared.

“When I am experienced enough, I am going to work on a website about teaching methods for instructors and parents with blind students or children.”

“Through this website, I hope that people would better understand the visually impaired, and develop suitable approached to education so that we can become useful members of society.”

With her desire to major in English translation, Vinh spent her last high school year going from college to college to apply for admission.

However, just like when she still lived in her hometown, Vinh was declined by all universities she visited as they all claimed they do not know how to teach a visually impaired student and couldn’t provide the necessary support.

Even though Vinh received advice from others to think about a less challenging area of study, she was still determined to learn what she loved.

After learning that RMIT Vietnam admits visually impaired students for all majors, she was determined to seek admission.

“Even though I knew that the chances were small, I still tried. If I had not been admitted, I would have found other English language courses to attain my goal,” she said.

“I hope that in the future, other universities will have better policies so that students like me can study what they truly like.”

Even though it was risky to only apply to one college, those who know her were not too worried as Vinh had always been an outstanding student.

“When Vinh said she only applied to attend RMIT that year, I was a bit nervous,” Nguyen Quoc Phong, director of Thien An charity organization where Vinh lives, said.

“However, being someone who has been with her since she was a child, I know that she always puts forth her best effort. She always has one particular goal and knows each step she needs to take to reach that goal.”