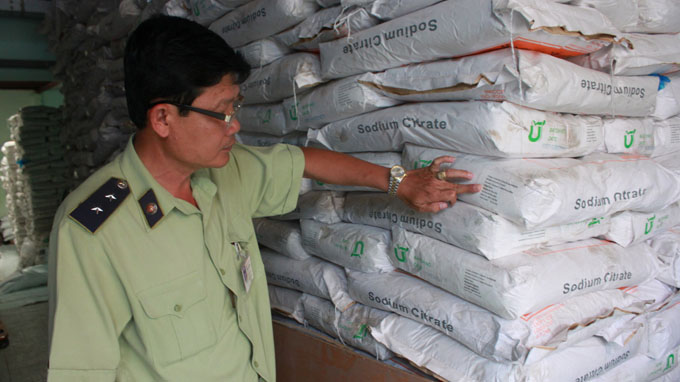 An additive and chemical supplier in Ho Chi Minh City was caught red-handed on May 4 when its employees were attempting to place labels with a new expiry date on a number of expired products.

Four employees of the Hoa Binh Chemical JSC, based in District 12, were mixing and packing the products with the brand names of Mixphos-V, Nonphos-WF and Nonphos-V from raw materials imported from China with an expiry date of May 4, 2013, according to market management officers.

After mixed, the chemicals would be stored in new packaging with an expiry date of January 10, 2015, officers said.

The packaging has the name of the manufacturer, but lacks all information regarding the product content, usage and storage manuals.

Hoa Binh Co often imported or bought chemicals that were nearly expired in order to re-manufacture and pack them into products with false expiry dates, the market watchdog agency said.

Officers said they seized 50 tons of such chemicals and 27 kilograms of packaging at the facility.

“There are also 10 tons of completely packed and altered products,” they said.

The confiscated chemicals, mostly imported from China and already expired, include sodium citrate and citric acid anhydrous, food additives that are used to preserve food and beverages.

Using out-of-date food additives will not only affect the quality of the products, but also do harm to consumers, according to chemical and health experts.

“An accumulation of such chemicals can result in ulcers in consumers’ stomachs and other viscera,” a doctor warned.