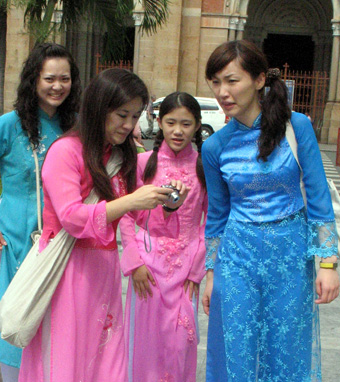 The number of Japanese tourist arrivals to Vietnam remained almost unchanged in the first half of this year, for a number of reasons, the chairman of the Overseas Tour Operators Association of Japan (OTOA) told Tuoi Tre.

Vietnam is not the only nation to post poor growth in Japanese tourist numbers, as fewer East Asian holidaymakers are travelling to other regional countries too, Takahiko Ohata said.

The main reason is that Japanese youths do not travel abroad much, instead focusing on work and income, as well as a wide variety of recreational activities, he added.

Instead of saving money for an outbound trip, Japanese youths use it to buy hi-tech devices such as smartphones and gaming devices.

“Moreover, the Japanese will not feel comfortable traveling when the economic slowdown still exists,” he added.

Vietnam welcomed 294,487 turns of tourists from Japan in the first six months of this year, a slight 1.9 percent increase compared to the same period last year, according to the Vietnam National Administration of Tourism.

Vietnam, however, remains the second favorite tourism destination of Japanese people, after Thailand, according to Ohata.

As for subjective reasons for the Vietnamese side, Ohata said Japanese tourists lack information about the country they are visiting.

Thailand, Malaysia, and Singapore have opened tourism representative offices in Japan to promote their countries, while Vietnam only has an annual program by Vietnam Airlines.

Ohata said the travel packages offered by the Vietnamese companies do not meet the expectations of Japanese customers.

Asked what Japanese tourists complain most about in Vietnam, Ohata said it is the attitudes and language skills of tour guides.

While Japanese holidaymakers do not complain about restaurant, hotel, and transportation services in Vietnam, they are upset by tour guides who do not speak fluent Japanese or those who fail to serve them enthusiastically, he said.

The chairman suggested that Vietnam should introduce more of its natural beauty and cultural features to the Japanese people, especially via TV, to boost tourism.

Vietnam should maintain and develop what is special about its history and culture, so that its tourism destinations will stand out from others in the region, and thus attract Japanese tourists, he said.