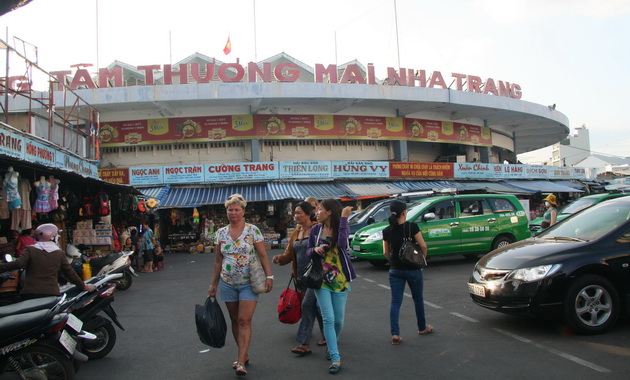 Tourists visiting Nha Trang may never be able to go shopping at the coastal city’s iconic Dam Market again, as it is slated for demolition to make room for a new project.

The market, which is shaped like a lotus blossom, will be completely destroyed and a new Dam Market will be built on a land plot just behind its current location, according to the plan developed by the Song Da Nha Trang Corp.

The company said the plan was approved by the Khanh Hoa’s People’s Committee, and will be publicized in the next few days.

The empty land plot left by the demolished market will become home to a square and a park, according to the plan.

The new Dam Market will no longer bear a lotus shape. It will be a three-story building, spanning more than 9,700 square meters, and will be located next to a zone specializing in selling fresh seafood.

The Cho Dam Apartment Block B, located next to the market, will also be torn down to make way for a parking lot and a night market, while Block A will be refurbished.

According to a plan approved by the shareholder meeting on June 22, Song Da Nha Trang Co obtained the license for the project from the Khanh Hoa’s People’s Committee in Q2/2013, and will start work in the fourth quarter of this year.

Dam Market was opened in 1974, on what used to be a mud pond (dam in Vietnamese). The market has won the local ‘good tourism destination’ award for many years.

“The market was thus constructed in the shape of a lotus to memorialize the mud pond,” said Quach Giao, an author.

Giao said the market, once leveled, will leave local residents and tourists saddened.

Meanwhile, Nguyen Van Dung, who runs a souvenir shop at the market, said it is one of the most famous destinations in Nha Trang, and has become an icon of the city.

Many tourists are delighted to tour around the market, saying it has unique architecture, he said.

“It’s a great pity that the market will be demolished,” he said.