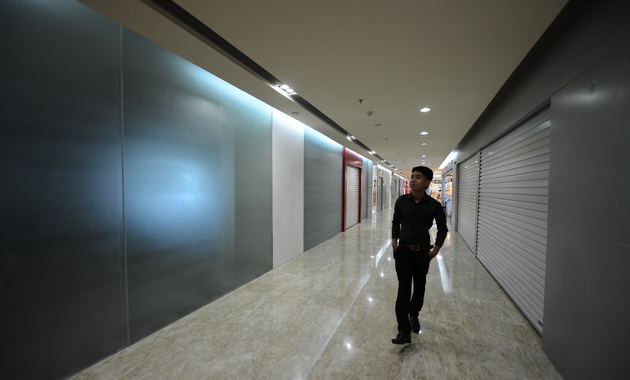 While retailers used to compete with each other to win a space inside shopping centers across Ho Chi Minh City, they are now in yet another race to get out of these expensive places due to repeatedly rising costs against poor sales.

During the second quarter of this year, a number of giant retailers have ended their space contracts with shopping malls citywide, leaving a huge available space for lease at these facilities, according to a recent report by CBRE.

Specifically, Home One returned 1,200 square meters of its leased space, while the respective figures of Gloria Jean’s and Nike are 100 and 150 square meters, the report said.

The main reason behind these moves is high leasing fees plus the slumping number of shoppers, according to CBRE.

The retailing sales of HCMC in the first six months of this year only posted a modest 8.1 percent growth compared to the same period last year, according to a report by Savills Vietnam. The growth however is lower than those recorded in 2012, which was 8.9 percent, and 2011, 8.8 percent, the company stated in a report.

Visitors to the Lotte shopping mall in District 11 these days can find a number of unoccupied spaces across its floors, with a security guard explaining that the retailers have had to end the contracts because they are “unable to cover expenses.”

A small shop has to pay some VND20 million (US$951) a month for leasing fee, while those choosing to lease under the commission scheme has to share 20 percent of the revenue they gain from selling each item with the center operator.

“We cannot survive either ways, with only one to two items sold every month,” lamented an attendant of an electronics store at Lotte.

Similarly, empty spaces can also be found at other shopping centers, from the Saigon Square Center in District 1 to the Crescent Mall in District 7.

“Monthly expenses are dozens of millions of dong, while daily sales are fewer than VND1 million,” said Thuy, who runs a small clothing store at Pico Plaza in Tan Binh District, adding she may have to give up on the business “if the condition fails to improve.”

Some shopping centers have had to cut the leasing fees for spaces at their facilities, but still cannot attract lessees.

Leasing fees at Crescent Mall were cut by 7 percent compared to last year, standing at only $25 - $45 per square meter per month, according to an employee.

A commercial center in Tan Binh District has even had to slash prices by three times since last year, but still “failed to keep old customers from leaving, let alone attracting new lessees,” said a representative official.

Three shopping malls in the city meanwhile had to convert its function in order to survive, the official added.

TS Plaza in District 7, and CMC Plaza and UPO in Tan Binh District are now functioning as wedding convention centers, he said.