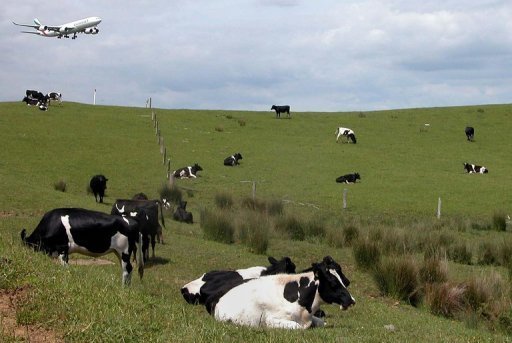 WELLINGTON – China has blocked all imports of milk powder from New Zealand, a New Zealand minister said Sunday, after bacteria that can lead to botulism was found in some dairy products.

China has not officially announced an import ban.

In Beijing, the Food and Drug Administration said it had met officials from three companies importing Fonterra products and instructed them to "immediately stop selling and to recall all food products" made with questionable material.

China has increasingly turned abroad for milk powder including infant formula after a series of domestic food scandals.

About 95 percent of its milk powder imports in January-March came from New Zealand, according to a government website, raising the prospect of a shortage if the alert continues.

The Xinhua news agency said Sunday four importers of Fonterra whey protein had begun to recall and seal products in response to the health scare.

One manufacturer, Shanghai based Dumex Baby Food, was also recalling two of its own branded formula products which were made with potentially contaminated whey protein from New Zealand, the agency reported.

Dumex has produced 726.552 tonnes of its own brand milk powder products with potentially tainted materials with 420.188 tonnes already sold into China's domestic market, the country's watchdog authorities said, according to Xinhua.

Groser said the situation with Fonterra was "very serious" and the whey protein concentrate had been exported to Australia, China, Malaysia, Saudi Arabia, Thailand and Vietnam.

"The authorities in China, in my opinion absolutely appropriately, have stopped all imports of New Zealand milk powders from Australia and New Zealand," Groser said on Television New Zealand's Q&A programme.

"It's entirely appropriate they should have done that. It's better to do blanket protection for your people then wind it back when we, our authorities, are in a position to give them the confidence and advice that they need."

Groser said New Zealand was working closely with China and other authorities. "The trade issues are not just about China," he said.

Danone Dumex Malaysia said it had ordered "a precautionary recall" of specific batches of milk formula for infants and young children, but tests had so far not shown any contamination.

Fonterra has revealed that three batches of whey product, which is used to make infant formula and sports drinks, have been found to contain the toxic bacteria Clostridium botulinum, which can cause botulism.

There have been no reports of any illness linked to consumption of the affected whey protein. It was made in May last year, although the contamination was only confirmed in tests last week.

The symptoms of botulism include nausea, vomiting and diarrhoea, followed by paralysis, and it can be fatal if not treated.

Dairy exports are New Zealand's major earner and its products are particularly popular in Asia, where they are considered the gold standard.

According to government data the dairy industry contributes 2.8 percent to New Zealand's GDP and about 25 percent of its exports. It is worth NZ$10.4 billion (US$8.1 billion) annually.

Chinese demand for foreign supplies has surged since 2008 when milk tainted with the chemical melamine left six children dead and more than 300,000 sick.

Hong Kong has seen so many mainlanders stocking up that in March it threatened up to a HK$500,000 ($64,000) fine and two years' jail time for those taking more than 1.8 kilograms (four pounds) across the border.