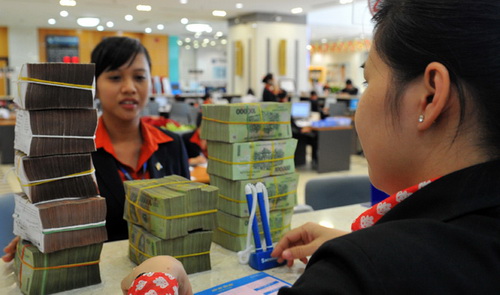 With the supervision of the State Bank of Vietnam (SBV), the local financial market has been gradually stabilized, so SBV is trying to steer the market towards goals set for 2013-end, said SBV Governor Nguyen Van Binh.

As of October 31, total outstanding loans increased by 7.18 percent, while total money supply rose 11.6 percent against the end of last year, he said in a recent report to the ongoing National Assembly meeting in Hanoi.

"Although there is still a distance to reach the yearly target of 12 percent in 2013, the current total outstanding loan growth rate is still much higher compared to that in the same period in 2012 of 3.54 percent.”

According to the SBV governor, in recent years, credit growth often surged in the fourth quarter.

As a result, on the basis of results achieved in recent years, especially the 6.01 percent growth in 2012’s 4th quarter, along with the solutions which are being actively implemented in the local banking system, the central bank thinks that the annual target of 11-12 percent is reachable, he added.

“This results in reduced cost pressures for local businesses and individual borrowers, thereby increasing aggregate demand to support the economy.”

SBV has so far received restructuring plans for 24 out of 25 joint stock commercial banks and approved the plans of 11 out of 25 banks, said Binh.

Under the national banking system restructuring scheme approved by Prime Minister Nguyen Tan Dung in 2011, the central bank has named nine credit institutions that needed to be restructured in the past two years.

Among them, eight have completed the first phase of the approved restructuring plan on a voluntary basis, while the remaining banks will consult with SBV before seeking guidance from the Prime Minister on voluntary restructuring, potentially with the involvement of foreign credit institutions, the Vietnam News Agency reported.