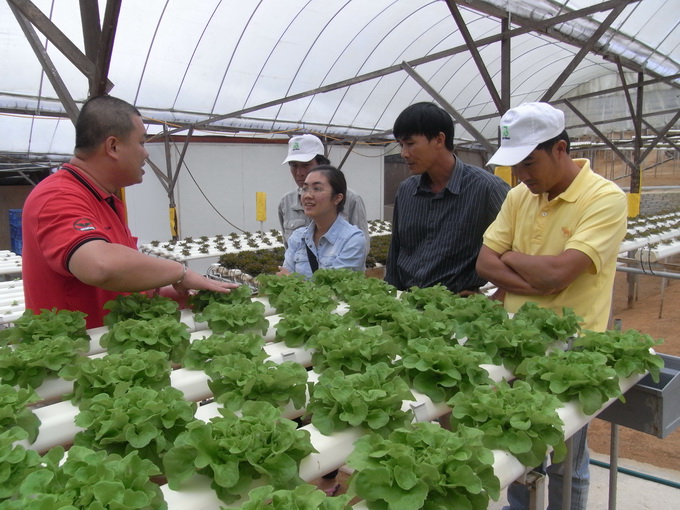 Nguyen Phu Quoc proudly takes any visitor for a tour of his tomato farms, where no soil is used to grow plants laden with beautiful, eye-catching tomatoes.

The plants are grown using hydroponic technology, an agricultural method that does not require soil, the farmer, based in the Central Highlands province of Lam Dong, reveals.

Instead, tomato seeds are placed in a growing medium consisting of a mixture of coconut fiber and rice husks. The mixture has no nutritional value, but helps the tomato roots adhere to the medium and enables the plants to absorb nearly all of the nutrients poured into the growing medium.

Another advantage of this method is that the coconut waste and rice husk ash mixture can be re-used for three crops in a row, Quoc says.

Nutrients and water are provided to the tomato trees via a drip irrigation system, which pumps these necessities drop by drop into the plants seven times a day. The concentration of nutrients varies depending on the development stage of the tomatoes.

In traditional farming, growers do not know which nutrients in the soil have been used up, but with hydroponic technology, this can be controlled, Quoc explains.

The farms are also covered with anti-insect nets to fully protect the tomatoes from diseases and destruction caused by pests.

A study trip to Malaysia

Quoc began to adopt hydroponic technology for his farms in 2013, but the first yields were not what he had expected.

While he was desperately searching for a solution, a Dutch seed supplier threw him a lifesaving buoy.

The company told him that a workshop on hydroponic tomato farming in Southeast Asia would be hosted in Malaysia in September, a hint that appeared like the light at the end of the tunnel for the desperate farmer.

Quoc said he had heard of Malaysian hi-tech agriculture before, but had never thought of traveling there to get hands-on experience.

The farmer then asked two friends to accompany him on the trip, and Nguyen Anh Dung and Nguyen Minh Cuong simply nodded their heads.

The three left Lam Dong in September 2013 for Malaysia using their own money. The trip cost around VND10 million (US$472) each.

Although the farmers speak no English, they were actively supported by the seed supplier and agricultural experts at the event.

“The trip was worth it,” Quoc said, while walking through one of his four tomato farms that are grown using hydroponics.

Quoc said his tomatoes are “amazingly beautiful,” adding that the knowledge he learned from the experts in Malaysia is worth far more than the trip’s cost.

Nguyen Anh Dung, who accompanied Quoc to Malaysia last year, said he learned a lot after only five days of working and discussing with the Thai and Indonesian experts at the conference.

The first crop of hydroponic tomatoes is producing some 6kg of fruit per plant, and the productivity could be as high as 10kg in the next crops, he said.

The current productivity is 120 tonnes of tomatoes per hectare, three times higher than under the traditional method. The tomatoes also have higher quality and lower pesticide residues than those grown normally.

And the three farmers do not have to worry about an outlet for their products, as a company has already contracted to purchase all of their tomatoes, they said.

The tomato growers added that they have not only mastered hydroponic technology, but they have also thought of getting involved in “agritourism.”

Dung said most of the farms in Malaysia are tourism attractions.

“I’m dreaming of the day when tourists heading from the provincial capital Da Lat City to Lien Khuong Airport can stop by our farms to take a tour,” he said.

“There, they can choose fresh, high-quality green produce to give to their family and friends as gifts.”