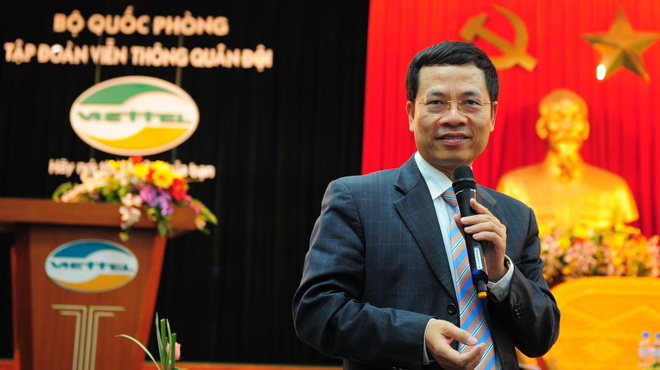 Accordingly, Major-General Nguyen Manh Hung has been promoted from deputy general director to general director of the army-run telecom group, according to Viettel. Hung will officially hold the post next month.

Earlier, at the hall of the Ministry of Defense, General Phung Quang Thanh - Minister of Defense made the decision to appoint Mr. Nguyen Manh Hung as the new general director of Viettel  on behalf of the Central Military Commission.

Mr. Hung is one of the first officials dispatched by the Ministry of Defense to work for Viettel from the founding day in 1989. He held the position of deputy director of the Military Telecom Co from June 2000 and deputy general director of Viettel Group from January 2010 to date.

Mr. Nguyen Manh Hung is highly praised among the local technology and business communities regarding his ability in management and strategic planning.

As a result, the appointment of Mr. Nguyen Manh Hung was seen as a move to keep Viettel's growth in the context that Vietnam's telecom market has entered a period of saturation, the OTT service revenues are eroding traditional telecommunications, and the investment in overseas markets has also become more difficult.

According to the Ministry of Information and Communications, Viettel Group continued to hold the no. 1 position in terms of revenue and numbers of active subscribers in the local telecommunications sector in 2013.

Under the direction of 2014 and the next year, Viettel has also identified the important strategic shift under the new general director, including the transition from mobile to mobile broadband, from a service company to one focusing on research and production of high-tech devices, and from a local firm to a multinational company.

A number of telecommunications projects by Viettel have been deployed in 9 overseas markets in the past few years, including Cameroon, Mozambique, and Haiti. They also achieved great success in neighboring markets such as Cambodia and Laos.