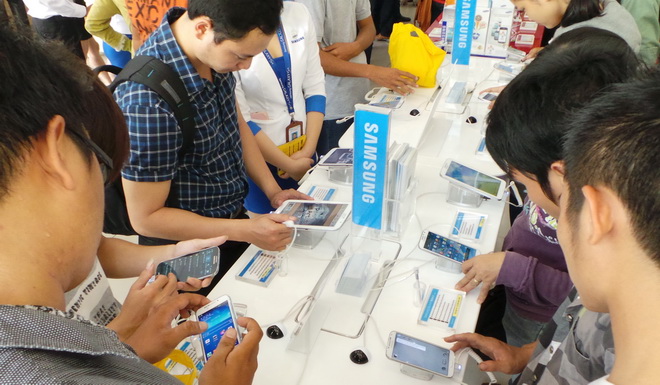 The price of FPT shares on Friday hit the ceiling of VND52,500, up VND3,300 (6.6 percent) over the previous trading session, after many newspapers in Vietnam published a translated version of an article on Bloomberg with misleading information.

While the original version emphasized the expansion plan of U.S.-based Apple Inc in Vietnam by cooperating with a local retail chain under FPT Corp, the Southeast Asian country’s leading tech firm, to form the authorized reselling chain F.Studio, local newspapers translated it into Apple’s plan for expansion by buying out the FPT retail chain.

The rise of FPT shares also helped the benchmark VN-Index of the Ho Chi Minh City Stock Exchange (HoSE) go up 5.89 points (one percent) over the previous day to 596.26 points.

FPT is facing a tough local rival, Mobile World Investment Corp, which was just listed on HoSE earlier this month, while Apple’s plan is to raise its share in the global smartphone market.

In the domestic market, the share of Mobile World Investment Corp, Vietnam’s biggest retailer of handheld devices, hit the ceiling at VND81,500 from its reference of VND68,000 on Monday, when the firm made its debut on the southern bourse with 62.72 million shares. The rise brought the company’s market value to VND5.11 trillion ($241.2 million).

Many investors have focused on Mobile World Investment Corp as they think the company will benefit from growth in the Vietnamese market for handheld devices, like smarphones and tablets.

Vietnam will be among the top 10 countries that have the highest mobile phone ownership in the world by 2016, said FPT Securities in a note to investors on July 9.

There were 98 million mobile phone users in the country with a population of over 90 million as of December 2013, according to the Ministry of Information and Communications.

In Southeast Asia, Apple is trying to tap into the market dominated by Korean archrival Samsung Electronics Co.

Android-powered smartphones accounted for 78 percent of the global industry last year, up 12 percent over the 2012 figure, while Apple’s iPhone was at the second position with 16 percent, down 3 percent year on year, according to U.S.-based market research firm Gartner Inc.

The global tablet market of Samsung rose 12 percent to 19 percent in 2013, whereas that of Apple dropped 17 percent to 36 percent, according to Gartner.