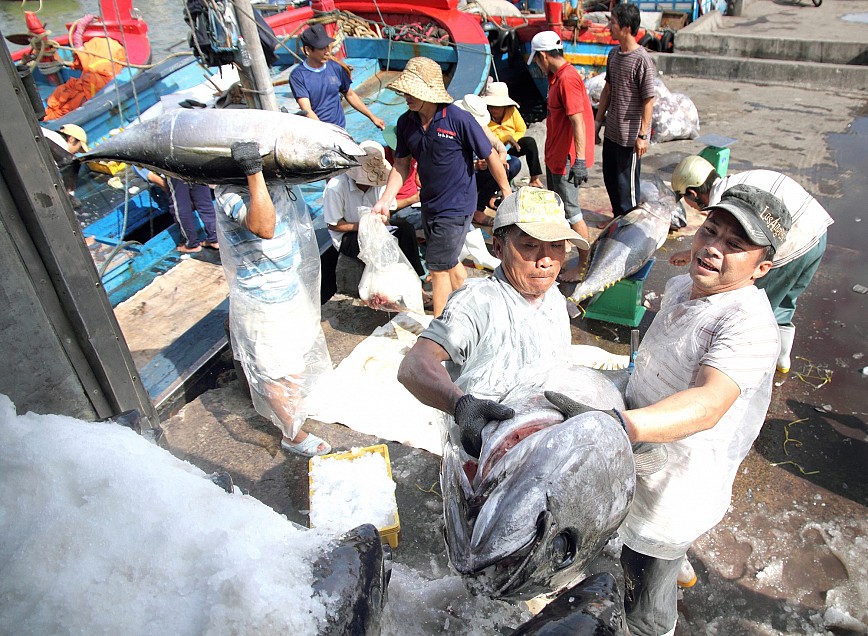 The first batch of tuna caught by fishermen in the central Vietnamese province of Binh Dinh using Japanese technology was sold out on Friday at an auction in the central fish market of Osaka City in Japan, according to the provincial Department of Agriculture and Rural Development.

The price was low partly because almost all tuna sold locally were hunted using traditional methods which reduce the quality of the fish when they came ashore.

According to Japanese experts, the quality of Vietnam’s first batch of tuna is not different from the same kind of tuna sold in the Japanese market. If Binh Dinh fishermen continue to adapt and overcome some of the limitations in hunting, processing, and preserving to ensure better tuna quality, the selling prices will be higher, they said.

On August 6, three fishing boats of Binh Dinh fishermen who used Japanese technology and equipment for tuna hunting docked at a port in the provincial capital city of Quy Nhon with 37 tunas, of which nine with the best quality were picked by Kato Hitoshi General Office (Kato Office), a Japanese importer, for shipping to Japan for the auction.

The batch were transported to Ho Chi Minh City and shipped to the East Asian country from Tan Son Nhat International Arport later the same day.

The deal makes Kato Office a Bidifisco representative in Japan, which will put Binh Dinh tuna on sale at the auction centers and seafood store chains of Kato Office’s partners in Japan.

Before that, Bidifisco had signed agreements with the owners of five Vietnamese fishing vessels on a pilot project to apply Japanese technology in fishing and storing tuna for export to Japan.

Accordingly, after local fishermen sell their products to Bidifisco, all of them will be shipped to Japan through Kato Office against Japanese standards.

From late July to early August 2014, the vessels caught 54 tuna, with an average weight of 40-50 kilograms each.