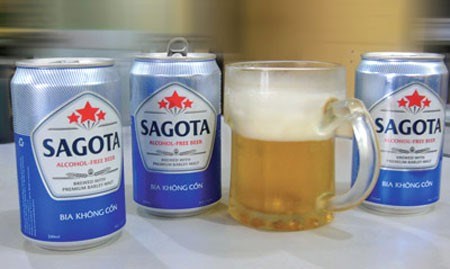 A subsidiary of the state-owned Saigon Beer Alcohol Beverage JSC (Sabeco) has become the first Vietnamese brewery to produce and sell non-alcoholic beer, with the first batches of products being sold in Ho Chi Minh City on Sunday.

Alcohol-free beer is beer with no alcohol content, which aims to reproduce the taste of beer without the inebriating effects of standard alcoholic brews.

“Sagota is brewed in accordance with normal production steps like other beer products, except for the fact that alcohol is extracted from the beer,” Liem said.

Drinkers will never get drunk with Sagota, making the product a healthy one, he added.

The alcohol-free product is suitable to serve women, athletes, and drivers, the chairman said.

Saigon Binh Tay Beer is monitoring market reactions to the new product, and once the non-alcoholic beer has become a common beverage, the company will “boost promotional campaigns to reach more drinkers,” Liem said.

Alcoholic beverages are an indispensable part of parties and meetings in Vietnamese culture, but the Southeast Asian country is enacting different measures to mitigate the negative effects of alcohol abuse.

Drinkers can be pulled over by traffic cops for alcohol breath tests, while the health ministry has suggested banning sales of alcoholic beverages after 10:00 pm.

“Alcohol-free beer thus emerges as a perfect solution for many beer-lovers,” Liem said.

The chairman said Sagota is much cheaper than imported non-alcoholic products.

Vietnamese are heavy consumers of beer and alcohol and the amount they down has been increasing year after year.

Ninety percent of Vietnamese adults drink beer and alcohol and every one in four drinkers consumes it at a harmful level – six glasses of beer a day or more, according to Nguyen Huy Quang, head of the legal department of the Ministry of Health.