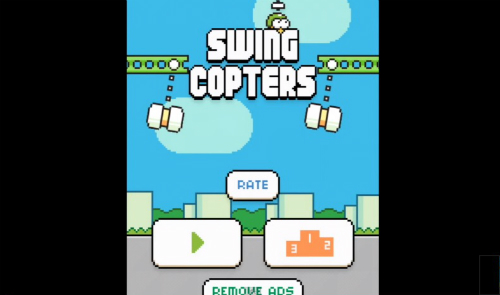 Nguyen Ha Dong, widely known as Dong Nguyen – the creator of mobile game Flappy Bird causing fever worldwide earlier this year, will be back on Thursday with the release of a new mobile game - Swing Copters.

The gameplay of Swing Copters is simple – it resembles that of Flappy Bird. What a gamer has to do is just to make another character, a copter with big eyes and no tail, fly vertically toward infinity instead of horizontally, and try to avoid swinging hammer while flying upward.

Once hit, the blades of the copter will break and the main character will be on a free fall until it hits the ground, being turned upside down.

Swing Copters also takes after what makes Flappy Bird famous –pixelated graphics, and the same scoring system like that found in the old game.

According to TouchArcade newswire, specializing on iPhone gaming, the new game will be free to download from Apple’s App Store, which is available on all Apple-made handheld devices, and play with in-game advertising. An add-free version is also available once you pay $0.99 for it.

However, it is unclear whether the new game will be brought to Play Store of smartphones and tablets running Google’s Android operating system.

The new release follows the revival of Flappy Bird earlier this month in a new name –  Flappy Birds Family – which Dong Nguyen promised to bring it back to life in May after removing it from the Apple’s App Store and Play Store in early February this year.

Instead of appearing on smartphone and tablet platforms as before, the new Flappy Birds Family is only available for downloading from the Android app store and play on Amazon Fire TV, which is a digital media player that allows users to play video games with the included remote, through a mobile app, or with a game controller.

Flappy Bird began to become a global phenomenon in late 2013 and early 2014, which led to the unexpected popularity of its author.

In early February, Dong Nguyen made a surprise decision of removing the game from the two electronic stores, while the game was still very popular back then. He told the press that his decision was due to the pressure of fame the game put on him.

At that time, it was reported that the Vietnamese app developer living in Hanoi earned about US$50,000 per day from in-game advertising.

At the height of the Flappy Bird craze, a solid 20 or so of the top 100 apps on the App Store were Flappy Bird clones, and that remained true even after the original came down, the Wall Street Journal reported.