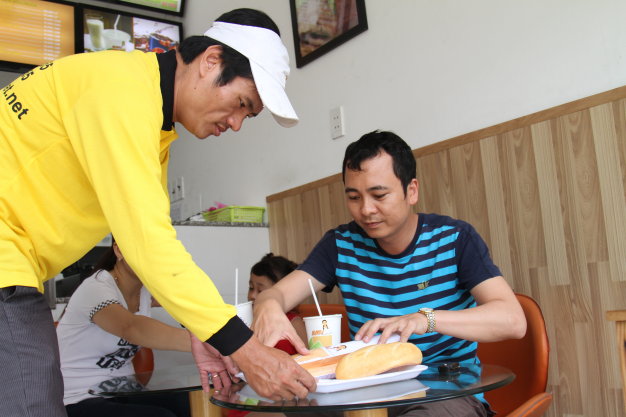 Two Vietnamese businessmen are working on their long-pursued dream of developing a series of stores offering Vietnamese-style bánh mì (bread) with meat which can be on a par with international fast food chains.

The chains will hopefully compete successfully against international fast food giants such as McDonald’s, KFC, and Lotteria, which have forayed into the local market in recent times.

Nguyen Viet Dao and Le Van Cuong are among them.

They later launched their second store on Cong Quynh Street in District 1.

“Bánh mì kẹp thịt,” one of Vietnamese people’s commonest quick snacks, is typically a loaf of bread stuffed with bacon and pork bologna in between. Meatballs, fried eggs or canned fish can also be put inside.

Back in 2010, the two men quit their office jobs to realize their dream of a branded bread chain.

The twosome would sit all day long on the sidewalk just to count the number of loaves of bread with meat sold from sidewalk bread carts.

They were amazed to learn that some thousands of such loaves sold out quickly from 4:00 pm to 10:00 pm.

The men then worked as apprentices for some local bread makers for several months to learn how to make their own bread with a unique taste and style.

“We hope that the traditional long loaves of bread with meat in between will give us a competitive edge against the exotic tastes offered by international fast food chains, which many locals still find alien,” Dao said.

The two men want their bread to be as cheap and popular as sidewalk loaves, but their products will be considerably more hygienic and healthier.

Food safety is among what gives the international chains competitive edges in the Vietnamese market plagued by food hygiene problems, for they know how to win local consumers’ trust by providing their food with clear origin and certification.

“The international chains are trying their best to change local consumers’ habits and are currently outdoing Vietnamese businesses thanks to their overwhelming financial capability and good management. This has also put our stores in much difficulty,” Cuong noted.

Earlier this year, the two men paid a costly price for their ambition and hastiness as they tried selling their bánh mì at Vincom Shopping Mall in downtown Ho Chi Minh City.

After two months, they suffered heavy failures for different reasons.

“We learned our lessons then. Vincom has an advantageous position, but the expenses to have our bread sold there was so whopping. Additionally, our bread wasn’t really suitable for the mall's clients, who typically wish to try exotic, expensive dishes rather than familiar fast food,” Cuong explained.

Despite the overwhelming difficulties, the duo remains undaunted.

“We’re really heartened at orders of hundreds of loaves placed by companies and film crews. We have realized that clients do love delectable, quick and cheap food for breakfast and lunch, which is also integral to the worldwide success of international fast food giants,” Dao observed.

Dao and Cuong plan to further develop their current two stores in the next two years before opening more.

“Why not hope that foreign tourists will delight in our Vietnamese-style bread and consider their time at our stores a memorable experience during their trip to Vietnam?” Dao said with a smile.