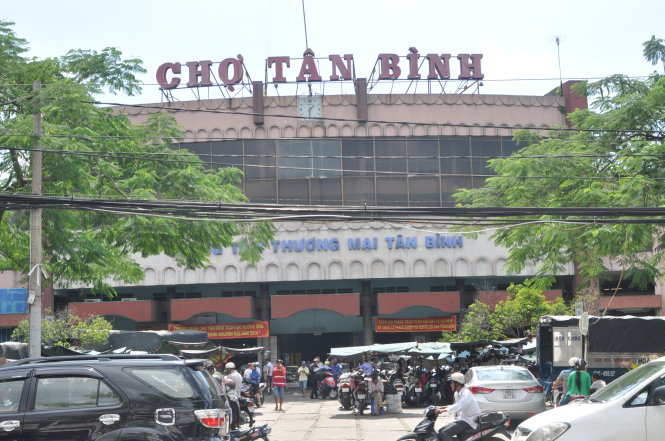 The administration of Ho Chi Minh City’s Tan Binh District will not stop the implementation of a project to replace a local half-a-century-old market with a modern facility despite strong protests from traders, a deputy chairman of the district asserted.

Should the project be halted now, it will never begin, Le Son, deputy chairman of the Tan Binh People’s Committee, told Tuoi Tre (Youth) newspaper in an interview published Tuesday.

Tan Binh market, one of the largest fabric wholesale markets in the city, is poised to be replaced by a six-story market, as Son said the facility has become “severely deteriorated.”

“It is the traders who will suffer the worst damage in case of a fire, explosion, collapse, or storm,” Son said.

The proposed new Tan Binh market is scheduled to break ground in May 2016, and expected to open to traders in November 2018.

Traders complain that they have never been asked to provide feedback on the plan, and that they will lose frequent customers if they relocate to the new market.

But the district official said traders were informed of the demolition plan as early as 2009.

“We delivered survey sheets to all traders and received around 60 percent of them back,” Son asserted.

Son said most of the traders responded that they supported the plan, as the market was deteriorating.

He added that as the government is the manager of the market, it reserves the right to refurbish or rebuild it.

While traders currently sell on the ground floor of the market, their booths will be relocated to the second floor, and higher, at the new facility, raising concerns that customers might be hesitant about having to go from floor to floor while shopping.

Son admitted that people are not used to going to multistory markets, but added that “in the longer term, it will benefit both traders and customers.”

He called on traders to “share the difficulties with the government.”

“Traders should not oppose the project just because of these short-term challenges,” he said.

Tan Quang Co Ltd, a Vietnamese investment-construction firm, has won the contract to develop the new Tan Binh market, according to the district’s government. The company said investment is projected to be around VND2 trillion ($94.14 million).

The proposed new market will only occupy 15,000 square meters, while the remaining 7,000 square meter land lot fronting Ly Thuong Kiet Street will be home to a 17-story mix-used trade center.

Son, from the district’s People’s Committee, said the ‘prime location’ is dedicated to the trade center, instead of the new Tan Binh market, because the modern shopping center “is the image of the district.”

The high-rise trade center will be developed by a joint venture between the Tan Binh Public Utility Services Co Ltd and Tan Quang Co, while the people’s committee retains possession over the land lot where the building will be erected, Son said.

“Profits generated from the trade center will be added to the state budget, not the public utility company,” he underscored.