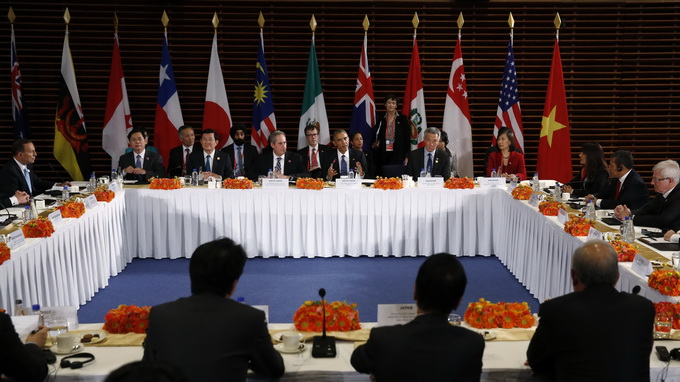 The Trans-Pacific Partnership Agreement (TPP) negotiations could be concluded in the near future as world leaders are inching closer to an agreement on the proposed trade pact, Vietnamese Trade Minister Vu Huy Hoang said Wednesday.

The TPP talks were initiated in March 2010 and there has been some success after nearly five years of negotiating, Hoang told reporters onboard his plane to Hanoi from Beijing, where he attended the Asia-Pacific Economic Cooperation (APEC) Forum, running from November 10 to 11.

The leaders of the 12 countries involved in negotiating the trade pact on Monday convened a high-level meeting at the U.S. embassy in Beijing to discuss TPP issues and eventually released a joint statement.

The leaders said they “welcome the significant progress in recent months” that “sets the stage to bring these landmark TPP negotiations to conclusion,” according to the Trans-Pacific Partnership Leaders’ Statement posted on the White House website.

“We are encouraged that ministers and negotiators have narrowed the remaining gaps on the legal text of the agreement and that they are intensively engaging to complete ambitious and balanced packages to open our markets to one another,” the document reads.

“With the end coming into focus, we have instructed our ministers and negotiators to make concluding this agreement a top priority so that our businesses, workers, farmers, and consumers can start to reap the real and substantial benefits of the TPP agreement as soon as possible.”

The meeting in Beijing resulted in more positive results than the one in Bali, Indonesia, last year, according to Minister Hoang.

“All of the 12 leaders agreed that this is the crucial time for the TPP talks, and it’s time to have the political determination to settle a deal in the near future,” Hoang said.

The world leaders said in the joint statement that their fundamental direction to their trade ministers throughout the TPP process “has been to negotiate an outcome that will generate the greatest possible benefit for each of our countries.”

“Continued engagement will be critical as our ministers work to resolve the remaining issues in the negotiation,” according to the document.

Also on Monday, the TPP trade ministers made a joint report to their leaders, which said the key remaining challenge to conclude the trade deal is “identifying the pathway to conclusion of ambitious packages of commitments that will open our markets to each other.”

These include packages of commitments for goods, services, investment, financial services, temporary entry of businesspersons, and government procurement, according to the report posted on the Office of the U.S. Trade Representative’s website.

“Ministers made further progress in narrowing the gaps between us on these issues in Beijing, and our discussions will guide the work of our negotiating teams in the weeks ahead,” the document reads.

Minister Hoang said one of the biggest challenges for Vietnam in the TPP talks is the rules of origin, which the trade ministers’ report said are “critical to facilitating and strengthening production and supply chains” between the TPP countries.

The TPP member countries must ensure that no other nations can take advantage of the trade deal to export goods to the bloc, according to some Vietnamese negotiators.

Vietnamese textile and garment businesses face a huge challenge from the “yarn forward rule of origin,” which means that all items in a garment from the yarn stage onward must be made in one of the countries that is party to the TPP agreement, according to the American Chamber of Commerce in Vietnam.

“In simple terms, the ‘yarn forward’ rule means that the benefits of the agreement accrue to regional producers rather than outside players such as China,” the business association said on its website.

But Hoang said there are some “possible solutions” to the issue at the moment.

“The 12 countries have made substantial progress on common rules of origin on the majority of products … We have set out a plan for concluding the remaining work to complete the rules of origin that support seamless supply chains,” the TPP trade ministers said in the report.