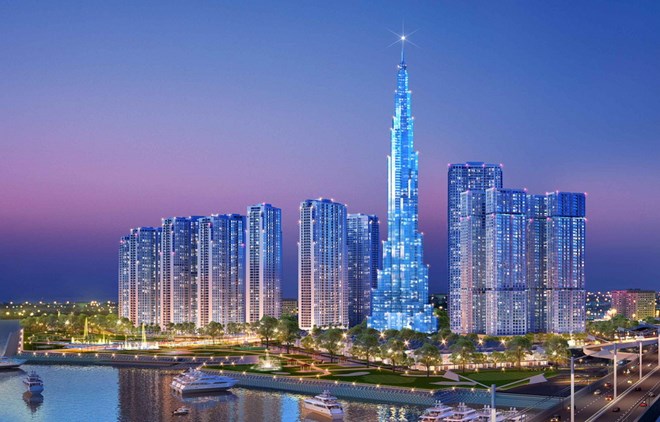 Real estate firm Vingroup on Saturday began construction work on an 81-floor building in Ho Chi Minh City, which is expected to be Vietnam’s tallest and hold a few Southeast Asian records, according to the Vietnam News Agency (VNA). The skyscraper, Landmark81, is at the heart of the deluxe residential zone Vinhomes Central Park, which is located on the Saigon River banks.

The building, slated to open by the end of 2017, has an expected height of 350 meters and boasts extravagant comforts which appear for the first time in Vietnam.

Upon completion, the Landmark81 will be the tallest skyscraper and one of the most sumptuous ones throughout the country,  according to the VNA.

Covering an area of 141,000 m2, the complex will be home to hotels, Vinhomes service apartments, Officetel commercial apartments, shopping malls, restaurants, bars and an observatory.

The five-star plus Vinpearl Hotel will boast around 450 rooms and suites, including a luxury 1,000m2 Presidential suite which offers a full panorama of the city.

Another highlight is a system of roughly 900 Vinhomes service apartments and Officetel commercial ones, including five-star and six-star ones with 180o views.

A restaurant and Sky Bar on the 66th and 67th floors, which also offer full panoramas of the city, will be among the world’s most luxury of their kind, the VNA added.

An observatory on the 79th floor promises visitors with full, gorgeous panoramas of the city and areas in the vicinity.

A 59,000 m2 Vincom Center shopping mall and a vast square and fountain system will also add to the complex’s lavishness.

Apart from being Vietnam’s tallest building, the VNA added the complex will also set other records, including the country’s highest observatory and apartments as well as Southeast Asia’s highest restaurant and bar.

The Asia Property Awards works to showcase the Asian real estate industry, boosting awareness and highlighting top quality developers, projects and services, according to its website.

This is the second year in a row Vingroup was named “Best Developer Vietnam” by the Asia Property Awards.

In the eight months ending on August 31, Vingroup's sales rate improved to around 90 percent of apartment launches, up from the 70 percent to 80 percent of 2013, according to Fitch Ratings.