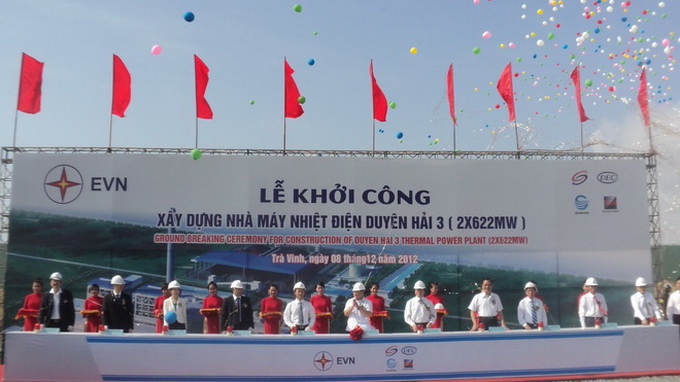 The Ministry of Construction has named Japanese trading company Sumitomo Corporation the contractor for parts of a project to expand a thermal power plant in southern Vietnam.

The Tokyo-based company will be the EPC (engineering, procurement, and construction) contractor for a supercritical power station under the Duyen Hai 3 coal-fired thermal electricity plant expansion project in Tra Vinh Province, the ministry said in a directive.

The Japanese contractor is required to use Vietnamese subcontractors during the implementation of the project as they have committed to in the contractor license application, according to the document.

Sumitomo announced in a press release in November that Toshiba Corporation would supply the key equipment – the steam turbine and the generator – for the power station, while American firm Babcock & Wilcox would provide the boiler.

The civil construction work would be carried out by Mitsui Engineering & Shipbuilding Co. Ltd. and the U.S. engineering firm Black & Veatch would be responsible for technical coordination, according to Sumitomo.

Sumitomo also said in the press release that the price tag would be US$800 million.

The 660MW Duyen Hai 3 thermal electricity plant will cover a total area of 880 hectares in Duyen Hai District after it is expanded, and will be capable of producing 3.9 billion kWh a year, according to state-run utility Vietnam Electricity (EVN).

The whole project is expected to cost VND22.78 trillion ($1.07 billion) and is being developed by Power Generation Corporation 1, an EVN subsidiary, according to The Saigon Times Online.

The developer is providing 15 percent of the total investment while the remaining 85 percent will be funded by loans.

Sumitomo said Duyen Hai 3 has been positioned as one of three urgent power development projects in southern Vietnam and it is due to complete the EPC contract by 2018, when power demand in the south is projected to reach a peak.

Vietnam’s electric power demand is forecast to rise more than 10 percent annually as the country continues its economic growth, according to Sumitomo.

With Vietnam dependent on hydropower for about half of its power generation capacity, there is a growing demand for power sources unaffected by the weather.

Sumitomo has worked on other projects in Vietnam, including building the Pha Lai 2 coal-fired power station in the northern province of Hai Duong under an EPC contract, and supplying equipment to the A Vuong and Buon Kuop hydroelectric power plants, located in the central province of Quang Nam and the Central Highlands province of Dak Lak, respectively.

Sumitomo said it is “seeking to step up its presence in Vietnam’s electric power market” by accepting and completing the construction contract for the Duyen Hai 3 project.

“Sumitomo will be further expanding its electric power infrastructure-related business on a global scale in Asian and other countries anticipating greater power demand, and will contribute through infrastructure improvements to the economic development of these countries,” it said.