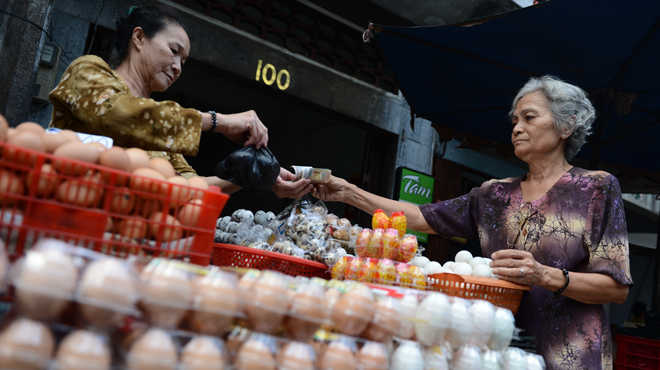 ISE Food is looking for local egg producer to exchange information and technology in raising chickens for eggs, as well as introducing eggs made by the company, vice-president Shuntaro Ise said during a meeting with deputy chairman Le Thanh Liem.

The Japanese businessman was in the southern megacity during a three-day visit to seek partners. Ise also expressed his desire to share experience with poultry farmers in Ho Chi Minh City and Vietnam.

A chicken egg exhibition is slated for August in Japan, and Ise is hoping he can find local farmers to attend the event.

Ise said ISE Food has a history of more than 100 years and is currently running farms of 120 million chickens in Japan, and 12 million in the U.S.

The city’s deputy chairman said Ho Chi Minh City is willing to exploit the strength of ISE Food to meet local demand, which is nearly 3 million eggs a day, or up to 1.5 billion a year.

Liem assigned the municipal Department of Agriculture and Rural Development to discuss future cooperation with the Japanese firm. He also expressed his hope that ISE Food will soon become a new investor in the city.

The visit by ISE Food to Ho Chi Minh City is part of the agricultural cooperation between the Vietnamese city and Japan’s Ministry of Agriculture, Forestry and Fisheries, according to newswire The Saigon Times Online.

Japan is encouraging its agricultural businesses to invest in Ho Chi Minh City, according to an agreement the two sides signed on January 20.