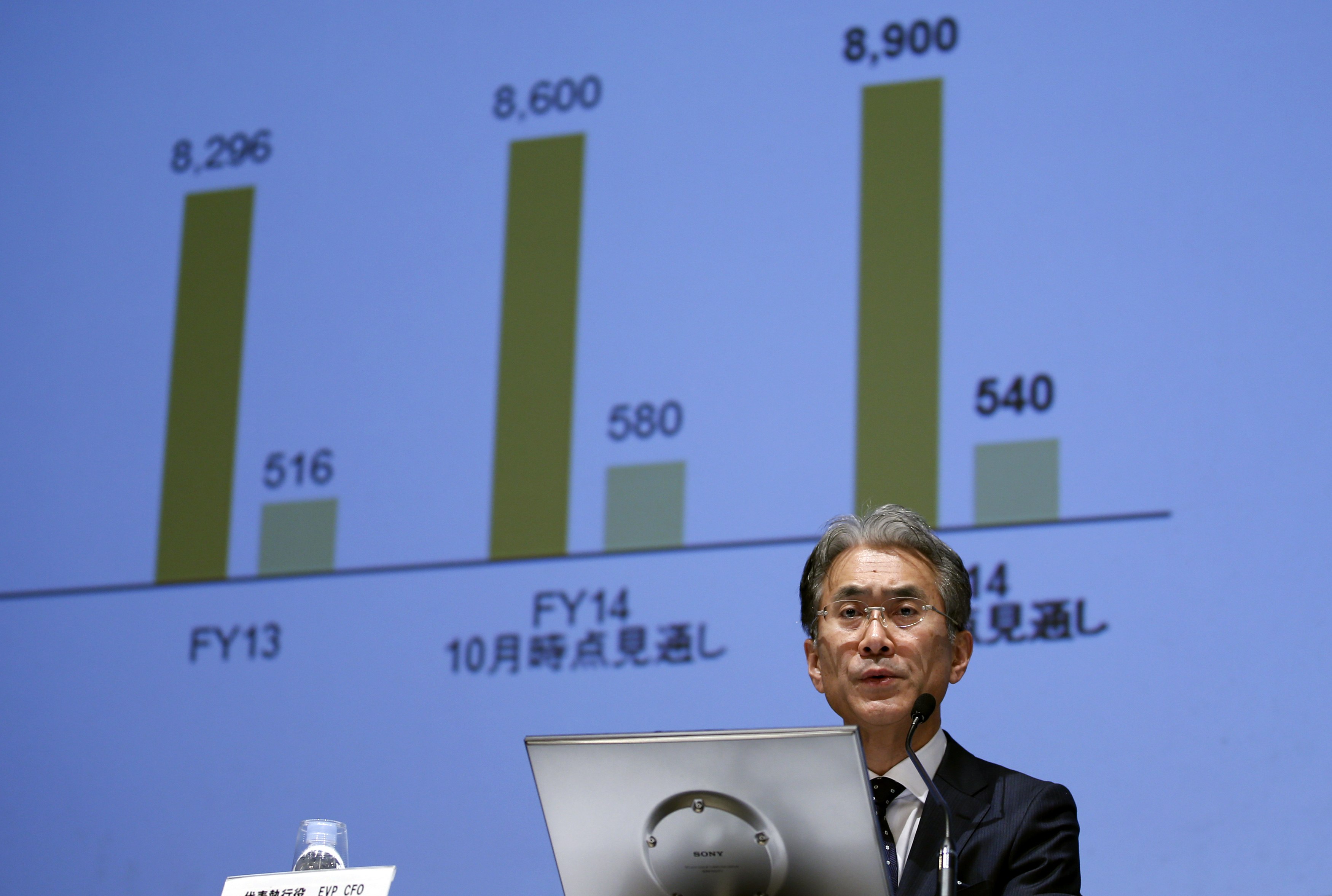 TOKYO – Months after Sony Corp bought So-net, the broadband provider's chief chided CEO Kazuo Hirai for having his "priorities in the wrong order".

He told Hirai his focus should be on restructuring the struggling electronics conglomerate rather than spending time and effort buying a firm it had previously spun off, said a person familiar with the exchange.

That was two years ago and Hirai was sufficiently impressed to hire Kenichiro Yoshida as Sony's chief strategy officer. Within months, he was promoted to chief financial officer.

Yoshida, a reserved foil to the more flamboyant "Kaz" Hirai, has since sought to turn around Sony with a no-nonsense programme of cuts and targeted expansion that has won over investors, even as the Tokyo-based conglomerate prepares to post a sixth loss in seven years.

Yoshida is pushing each Sony division to take more responsibility for its performance, a direction that insiders say Sony is likely to confirm in a new multi-year business plan to be unveiled on Wednesday.

Under Yoshida's knife, Sony sold its ailing Vaio personal computer division, a seismic shift for the group as this was an established, 17-year-old brand. He spun off the TV business and axed thousands of jobs across the company while raising spending on imaging sensors, a profitable segment and likely future profit driver.

Yoshida's overhaul is not only being felt in Japan; it has rattled Sony's traditionally autonomous Hollywood big shots.

Late last year, he pressed Sony Pictures CEO Michael Lynton to give "serious consideration to modifying the Entertainment executives' compensation plans," emails leaked by hackers in November revealed. Lynton confided to studio co-chair Amy Pascal that he felt he was under "enormous pressure." Pascal has since left the company in the wake of other embarrassing emails disclosed in the hack.

The Yoshida shake-up seems to be paying off.

Sony this month reported stronger-than-expected quarterly results, forecast a smaller net loss for the year to March than previously expected and reversed a forecast operating loss to a profit.

Some analysts believe Yoshida is striving to get Sony's mobile business back in the black with an eye on a possible sale. Sony declined to comment for this article.

Sony shares have risen more than 70 percent since Yoshida was named CFO last April - including a 28 percent run-up in the past month that was missed by activist investor Daniel Loeb, who said in October he sold his Sony stake after failing to persuade management to sell part of its entertainment business.

Under Yoshida, Sony's 5-year credit default swaps , the cost of insuring its debt against default, have halved.

Jefferies analyst Atul Goyal, who has a "buy" recommendation on Sony, last week raised his target price by 15 percent to 4,050 yen. The stock closed on Friday at 3,220.5 yen.

With Yoshida as CFO, "Sony has responded more quickly to the changing environment and competition," said Fitch Ratings director Kelvin Ho. "It's been able to make more bold decisions." Yoshida has injected a sense of urgency, Ho added, but to return Sony to investment grade - Fitch still rates its debt a speculative BB- - the company needs a broader base for profits.

Ho and others say the real test for Yoshida will be in securing long-term sales growth rather than merely making Sony profitable again.

Aside from an announced increase in production capacity of image sensors, used in smartphones and security cameras, analysts say Sony's best growth opportunity ahead may be in making better use of its PlayStation network to attract consumers beyond videogame players, with better movie and music services.

Sony has fumbled to emulate the success of Apple Inc's iTunes platform, and recently said it was ending its own Music Unlimited service, offering music through Spotify instead. For Yoshida, the challenge may be in continuing that search while keeping costs under check.

Jefferies' Goyal warned: "given the sharp recovery in the stock price, the CFO may need to watch out for senior executives relapsing into grand expansionary visions."