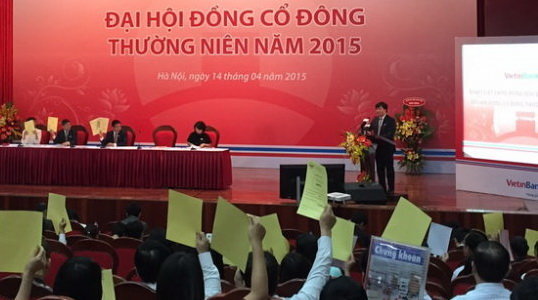 The Vietnam Joint Stock Commercial Bank for Industry and Trade, better known as VietinBank, on Tuesday got the approval from its shareholders for a merger with Petrolimex Group Bank (PG Bank) in accordance with the overall plan of the State Bank of Vietnam (SBV) unveiled early this year.

The approval was given after the bank’s board of directors consulted its shareholders on the issue at its annual shareholders’ meeting in Hanoi.

After the merger, the new financial institution will continue to be named VietinBank, becoming the largest and 2nd largest bank by registered capital and assets in Vietnam with VND40 trillion (US$1.85 billion) and VND686.9 trillion ($31.6 billion), respectively.

VietinBank shareholders also agreed on the swap ratio of 1:0.9, or one PG Bank share will be exchanged for 0.9 Vietinbank share, at the meeting, and the Hanoi-based bank will issue more shares for conversion with PG Bank shares.

During the first three months of this year, the leaders of the two banks worked to complete the merger contract, he said.

It is expected that the SBV will approve the merger between the two banks in June this year, Bao added.

The merger with PG Bank, of which about 40 percent stakes owned by national oil trading conglomerate Petrolimex, was one of the most important content for which VietinBank leaders sought the approval from their shareholders at the meeting.

The VietinBank leaders said that after the merger, long-term strategic cooperation between the new bank and large corporations in the energy sector will be boosted significantly in addition to an expansion of capital, networks, and customer base.

This is the basis for the bank to increase the size of credit and deposit balances, said the bank’s leaders.

At a VietinBank conference in late January, SBV Governor Nguyen Van Binh said he wanted to see the lender become one of two Vietnamese banks rising to the regional level in scale and capacity.

VietinBank is 64.5 percent owned by the state while Japan's Bank of Tokyo-Mitsubishi UFJ has a 19.73-percent holding, Reuters reported.

PG Bank, formerly known as Dong Thap Muoi Joint Stock Commercial Bank, had a chartered capital of VND3 trillion ($138 million) and total assets of about VND25.78 trillion ($1.19 billion) as of the end of last year.

In late March, the SBV gave the green light to a merger between two unlisted joint-stock commercial banks, Maritime Bank and Mekong Development Bank, according to a joint statement released by the two.

The go-ahead for the merger came after the SBV announced on January 17 that it would accelerate consolidation in an effort to reduce the number of banks and increase the efficiency of the banking system.

SBV Governor Binh stated boldly at a conference in Hanoi that the first half of 2015 will be the peak time for a restructuring scheme, resulting in more mergers and acquisitions in the banking sector.

The SBV has already set a target to firmly deal with weak banks with dim prospects of recovery and development, even forcing them to dissolve or go bankrupt.

Vietnam's central bank has said that it expects six to eight mergers this year as it seeks to strengthen an overcrowded sector of more than 40 lenders, many of which are considered by analysts to be under-capitalized and laden with bad debts, according to Reuters.