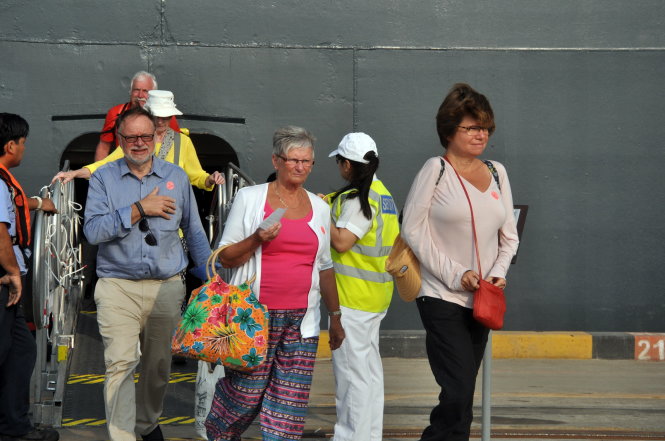 A month-on-month increase in April could not prevent Vietnam from suffering the 11th consecutive drop in tourist arrivals as the total number of international vacationers visiting the country this month was still lower than a year earlier.

Vietnam welcomed 690,440 international tourists in April, an 11.7 percent increase from March, according to estimates released Monday by the Vietnam National Administration of Tourism (VNAT).

The tourist numbers, however, shrank 7.4 percent compared to April 2014, the VNAT noted.

This is the 11th straight month Vietnam posted a drop in international tourist arrival numbers.

Last month saw 617,895 holidaymakers spending their time in Vietnam, a 12.9 percent decline from March 2014, the VNAT reported earlier this month.

In the January-April period, Vietnam’s total tourist numbers are estimated at 2.69 million, yet another drop of 12.2 percent from the same period last year.

However, no positive signs have yet been recorded from Vietnam’s traditional markets, namely Russia and China.

Many hotels in Ho Chi Minh City said while their business was going on quite well in the first four months of this year, the situation will become tougher starting May.

“It’s not an easy task to attract tourists between May and July,” Dang Huy Hai, deputy general director of New World Saigon, was quoted by The Saigon Times Online as saying.

The reasons for the downfall of Vietnam’s tourism industry are still its rigid visa rule and poor service quality, according to the newswire.

The number of Chinese-speaking tourists still fails to escape from the downward trend after it began falling in May 2014, following the tension over an oil rig China illegally stationed in Vietnamese waters then.

Beijing then withdrew the drilling platform from the waters in July given fierce protests from Hanoi and the international community, but tourist arrival numbers still failed to escape from the falling trend.

Tour packages to Vietnam have also become more expensive for vacationers in Japan, Russia and some European countries due to the strengthened U.S. dollars while the USD-VND forex rate remains quite stable.

Vo Anh Tai, general director of Saigontourist, a local leading tour operator, said many of his partners have demanded that tour packages to Vietnam have more competitive prices.

“They want the Vietnamese side to offer more promotional programs to lure tourists,” he told The Saigon Times Online.