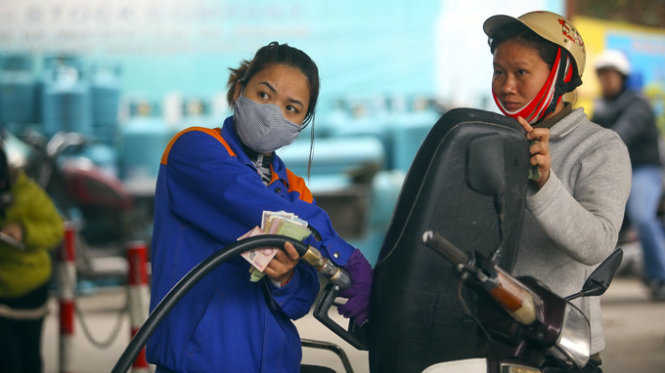 The Ministry of Finance has said Vietnamese consumers should feel relieved as the petrol price increases on Tuesday were much lower than they could have been, a view strongly blasted by local economic experts.

Retail prices of A92 and A95 petrol in Vietnam gained VND1,950 a liter, or a 12 percent increase, starting late Tuesday, and an official from the Ministry of Finance said a day later that the hikes “should have been much higher.”

Vietnam reviews fuel prices every 15 days, with the imported A92 petrol price from April 20 to May 4 averaging US$77.67 a barrel, up nearly $10 a barrel, or 14 percent, according to the official, who wished not to be named.

The Southeast Asian country imports around 70 percent of its fuel demand, mostly from Singapore. The Dung Quat Oil Refinery, located in the central province of Quang Ngai, covers the remaining 30 percent.

The Ministry of Industry and Trade and its finance counterpart are assigned to manage domestic fuel prices.

The two ministries have said the Tuesday price increases “had been carefully calculated” so that they would not greatly affect local businesses and consumers.

“The price increase slapped on A92 gasoline should have been VND3,387 a liter if we really let [fuel prices] be driven by market forces,” Vo Van Quyen, head of the industry ministry’s domestic market department, told Tuoi Tre (Youth) newspaper on Wednesday.

The ministries thus decided to earmark money from the fuel price stabilization fund to reduce the scale of the increases, Quyen asserted.

But Ngo Tri Long, former head of the Institute for Price and Market Research under the finance ministry, said that the move only reveals the ministries’ inflexible and poor price management.

The economic expert particularly criticized the higher environmental tax imposed on fuel since the beginning of this year.

The Ministry of Finance has repeatedly asserted that the new tax rate would not make fuel prices more expensive as it has also lowered the fuel import duty to 20 percent from 35 percent.

“Even so, the 15 percentage-point decline of the import duty is still lower than the 200 percent increase of the environmental tax,” Long told Phap Luat TPHCM (Ho Chi Minh City Law) newspaper.

Every liter of fuel sold in Vietnam now ‘shoulders’ a VND3,000 tax, threefold the old rate.

Long said increasing Vietnam’s fuel prices is an inevitable move as prices in the world market are also making rapid recovery, but what matters is the “limited prediction ability” of the finance ministry.

“In June 2014, when global oil prices were shrinking, the finance ministry forecast that they would recover slowly so it proposed hiking the environmental tax and hoped that would not increase fuel prices,” Long said.

Reality shows that such a prediction was wrong.

Another economic expert, Dr. Le Dang Doanh, also told Phap Luat TPHCM that the finance ministry should have managed fuel prices in a more flexible way to avoid “leaving consumers in shock” whenever they announce a price hike.

Doanh said the increase in environmental tax should have only been 100 percent, and the import duty should have been slashed further to ease pressure on consumers when global fuel prices fluctuate.

As for the latest petrol price hike, the second this year, Doanh said what the finance ministry should do is make it clear how much the global fuel price and the environmental tax account for the increases.

The finance ministry always denies the link between the higher tax and more expensive fuel price, “but things are still vague,” Doanh said.

The economic expert added that the finance ministry also lacked a compelling reason for increasing the environmental tax by as much as 200 percent.

“It’s logical to hike the tax for the sake of environmental protection, but the ministry has said it is to make up for the loss from the lowered import duty,” he told Phap Luat TPHCM.

“The ministry was under pressure to increase state budget collection when it set the new environmental tax, which is unreasonable.”

The new environmental tax rate will add some VND10.83 trillion ($504.71 million) to the state budget.

Petrol prices in the country constantly fell from July last year from the record high VND25,640 a liter to the bottom of VND15,670 a liter in January.