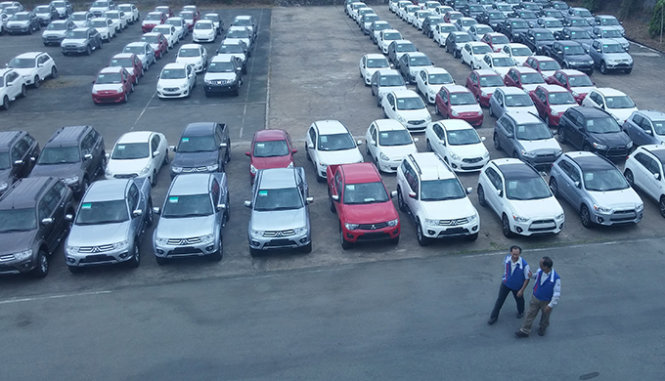 In Vietnam, car buyers’ dreams may be shattered by new taxation policy

Vietnamese potential car buyers who are saving up for their first cars following a possible price cut for automobiles imported from ASEAN countries may wake up one morning only to find that their dreams are crushed when a proposal for a new special consumption tax mechanism takes effect.

The proposed changes to how the special consumption tax is calculated, submitted to other relevant state agencies for evaluation and recommendations by the Ministry of Finance late last month, is expected to drive up the retail price of automobiles starting next year, according to news website vneconomy.vn.

Accordingly, the calculation of the new special consumption tax will be based on the wholesale prices, covering all profit margins and almost all other kinds of fees and charges emerging during the process of transferring the vehicles from importers to dealers, such as customs, registry, storage, freight, advertising and marketing.

The tax is now based on the CIF, which is inclusive of manufacturing, insurance and freight costs, and import tax.

Before the ministry publicized the new draft law for evaluation and recommendations, many potential car buyers were still very optimistic about the prospect of retail prices dropping more than two years after Vietnam fully integrates into the ASEAN Economic Community (AEC).

The Association of Southeast Asian Nations (ASEAN) is a ten-member bloc which includes such Southeast Asian countries as Indonesia, Malaysia, the Philippines, Singapore, Thailand, Brunei, Cambodia, Laos, Myanmar and Vietnam.

As planned, the ASEAN will form the AEC, a free trade bloc, by the end of this year.

The expectation of retail prices dropping is well-founded, as according to the ASEAN Trade in Goods Agreement (ATIGA), duties on imported automobiles, or completely built units (CBUs), from Southeast Asian countries will be reduced gradually before being fully exempted by 2018.

Under the current tax policy, the import duty is the second element constituting the market price of CBUs after the CIF fee.

Therefore, if the import duty rate is reduced to zero, it will also reduce a variety of taxes, fees and other expenses calculated based on it for car importers or distributors. Automobile retail prices in the market, as a result of the import duty exemption, would decline sharply.

In fact, though the tax cut is only applied for ASEAN-made CBUs, car sellers will have to adjust the selling prices for vehicles of different origins in order to compete, or at least survive, under the pressure of tax-free CBUs from ASEAN.

However, these preparations are no longer necessary with the change in the plan to recalculate the special consumption tax by the Ministry of Finance.

Prices will increase, not decrease!

If the new tax policy materializes, it will mostly affect CBUs, while locally assembled automobiles, or completely knocked-down vehicles (CKDs), will be virtually untouched.

The special consumption tax rate for domestically assembled vehicles is currently calculated based on the price at which an automobile is sold to the dealer, including business profits, freight charges from the place of production to the agent, and other expenses such as advertising.

By then, the tax rate for CBUs would be worked out on the basis of the CIF price and import taxes.

First of all, for all vehicles imported from the countries of Southeast Asia, their retail prices cannot be lowered, following the suggested calculation of the special consumption tax since 2016.

In fact, the retail prices of these models will be hiked soon to offset the reduction in revenue caused by lowered tax rates.

While import tax rates will go down toward zero percent following the ATIGA roadmap, revenues will be offset by the introduction of the new consumption tax rate, according to news website VnEconomy.

According to the tariff reduction schedule as stipulated in Circular 165/2014 / TT-BTC issued by the Ministry of Finance in November 2014 to implement ATIGA agreements, tax rates for CBUs imported from Southeast Asia will drop to 40 percent in 2016, 30 percent in 2017 and to 0 percent in 2018.

Thus, for at least two years, from 2016 to the end of 2017, the price of imported CBU cars from Southeast Asia will almost certainly increase.

Second, CBUs imported from markets outside of Southeast Asia will suffer the most, as they will not enjoy import tax cuts, and will also bear higher tax rates.

This means that the prices of a majority of luxury cars will go up dramatically due to the new tariffs and charges applied to the higher cylinder-capacity vehicles.