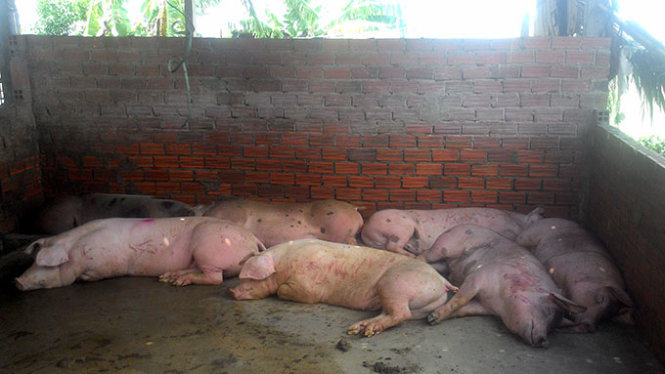 Pigs are sedated at unlicensed slaughterhouses in Ho Chi Minh City before they are killed, and the drugs are not only meant to keep them calm while being butchered.

Pork cuts from pigs injected with sedatives before being butchered are softer and better-looking, so such sedation is popular at most illicit slaughterhouses, Khuong Tran Phuc Nguyen, head of the inspection division with the city’s Animal Health Department, explained.

But as the pigs have no chance to excrete the drugs, those who eat the pork will face the risk of many diseases, doctors warn.

The Ho Chi Minh City Animal Health Department last month discovered two unlicensed slaughterhouses injecting tranquilizers into pigs before killing them, and six such cases since 2012, according to the chief inspector.

Most of the butcher houses are located in such outlying districts as Cu Chi, Binh Chanh, Hoc Mon and District 12.

An official poses for a photo with several bottles of sedatives. Photo: Tuoi Tre

“The most common sedative drugs are Prozil and Combistress, and the sedated pigs will barely move after the injection,” Nguyen said.

On July 29, animal health officials in Hoc Mon District caught an illicit slaughterhouse run by Nguyen Van Tien red-handed administering sedative drugs to 22 pigs which were to be butchered there.

Tien bought the pigs from farms in the southern province of Binh Duong, and would butcher six animals per day to sell to nearby markets, he told officials.

The pigs would be injected with a 0.2 or 0.5ml dose of Prozil before being slaughtered, he admitted.

On July 6, the animal health agency in District 12 also found a number of used bottles of Combistress at an illicit slaughterhouse owned by Nguyen Van Van.

Van admitted to buying the drugs at VND90,000 (US$4) a bottle, and would sedate the pigs around two hours before slaughtering.

“A bottle can be used to administer to 40 to 50 pigs,” he said, adding the pork would be distributed to nearby industrial parks.

Dr. Le Thanh Hien, dean of infectious disease and animal health with the Ho Chi Minh City University of Agriculture and Forestry, said it is allowable to use sedative drugs to keep aggressive animals calm during transportation, but not in slaughtering.

“Once administered, it takes the drugs five to seven days to be completely excreted from the animals,” she said.

“The sedative residue may thus cause harm to the pork consumers.”

Those who eat pork with such drug residues may suffer low blood pressure, dizziness and constipation, according to the doctor.

“The symptoms are more serious with children, the elderly and those with a history of heart, kidney or liver diseases,” she warned.