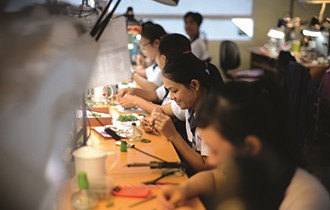 PNJ chairwoman: the new conquering and the leadership transfer

Advertorial - After 30 years directing PNJ, Chairwoman and General Director Cao Thi Ngoc Dung has decided to transfer the firm’s leadership to the next generation.

Phu Nhuan Jewelry Joint Stock Company (PNJ) had a remarkable beginning in 2014. In the first half of the year, although net sales were lower than planned, only VND4,925 billion, after-tax earnings exceeded its target and grew nearly 50% over the same period of the previous year.

These figures helped PNJ overcome doubt about its maintaining fast and sustainable growth in the future.

With the current growth pace, PNJ can totally achieve the profit peak like in the 2011-12 period. More remarkably, this profit came mostly from PNJ’s core jewelry business, not from any sudden changes in gold bullion price as people used to witness.

Apparently, there are always determinants after any success story. With PNJ, that is the important role of Ms. Cao Thi Ngoc Dung – Chairwoman and General Director – who has led the firm for more than 26 years. The following small talk between the journalist and Ms. Dung will reveal many interesting things about PNJ’s restructuring effort, the firm’s challenges on the way to sustainable development and its leadership transfer to the next generation.

Can you share with the readers how PNJ’s profit in first half of 2014 grew nearly 50% over the same period of the previous year?

I think there were positive changes in the gold jewelry market since quarter 4/2013. Due to the customers’ confidence in the economy’s recovery, demand for jewelry generally increased, thus we had a high growth rate. For example, PNJ’s wholesale business grew 48-50% while we were supplying gold to more than 3,000 retail stores nationwide.

After 30 years directing PNJ, Chairwoman and General Director Cao Thi Ngoc Dung has decided to transfer the firm’s leadership to the next generation.

In recent years, many shareholders have doubted the sustainability of PNJ’s development. They also say it was lucky for PNJ to have favorable conditions in gold bullion business due to the support of policies, especially in 2011?

I agree that in 2011 PNJ had high profits, to which our gold bullion business contributed significantly. But in the following years, you could see that PNJ did not plan to massively grow, as we know the sale and profit of gold bullion business depend mostly on changes to the macro-economy and governmental policies. We also know that profit from this business is unsustainable. Thus currently, our profit completely comes from gold jewelry trade, which is our core business. We see this as a milestone to build a new sustainable development plan for the coming years.

As you said, if PNJ is operating well, why did you decide to restructure it?

Since its establishment, PNJ has constantly grown up, but I have never been satisfied with what I have done. Throughout 26 years of operation and in each 5-year period, we have always looked back and reviewed our activities.

When we hired foreign consultant experts to standardize our administrative system in accordance with international standards in 2012, we were determined to restructure our operating system and strategies. We had to change not to fall behind.

Winning the demand at all costs

What challenges PNJ will face in the next 4-5 years?

Firstly, the biggest challenge for the jewelry industry is inconsistent administrative policies. However, PNJ’s biggest challenge is still human resource development to adapt to the market and future growth potential.

Currently, PNJ still lacks strong and qualified personnel for sustainable development. As I have said, we can’t just recruit new jewelers. PNJ is like a school where we constantly learn with our partners and even foreign experts who come to share experiences in retail jewelry business.

Vietnam’s demand for jewelry in comparison with the region

If gold jewelry is divided into segments, which one contributes the most sales and profit to PNJ?

PNJ currently operates in all segments. With wholesale business in the ordinary market, PNJ is considered a premium brand name because gold store owners are concerned about gold quality and sophistication. This segment occupies 50% of our production.

PNJ’s second target segment is mid- and high-end markets, and our target customers are those who have a moderate and fair income. PNJ’s retail products are also different: the quality of gold, diamond or gemstone also meets international standards.

Moreover, we also have luxury product lines, such as the CAO Fine Jewelry brand, to compete with international brand names. This is a narrow segment, and our target customers are those with a high demand for rare, unique and sophisticated products.

So when Vietnam’s gold jewelry market is wide open to foreign companies in 2018, what will be PNJ’s advantage to compete with foreign products?

We don’t see any problems with this. If it comes to manufacturing technology, PNJ is not inferior to any world-leading companies. If it’s about design, PNJ also has a strong design team.

In 2018, we may compete in terms of prices and costs, which depend mostly on productivity. In countries like Thailand, productivity is still higher than our country’s, yet PNJ has constantly made the best effort to increase our productivity and decrease production costs.

How is the leadership transfer of PNJ going?

We have prepared for this for many years. The successors have been chosen and are still being trained. In 2017, we will have a big change in the leadership.

In many speeches, you have talked about a dream of world-class PNJ, or even a world-leading PNJ. Have you ever thought that dream is so far-fetched?

In the world, companies operating in this industry are mostly privately owned. But PNJ originally was a large state company with experience in crafting and trading jewelry, so it’s easy to understand why PNJ is a large-scale firm and used to rank 16th in the world’s leading jewelry companies. There are not many companies in the world that operate in both jewelry crafting and trading like PNJ. So why shouldn’t we dream about the number 1 spot?