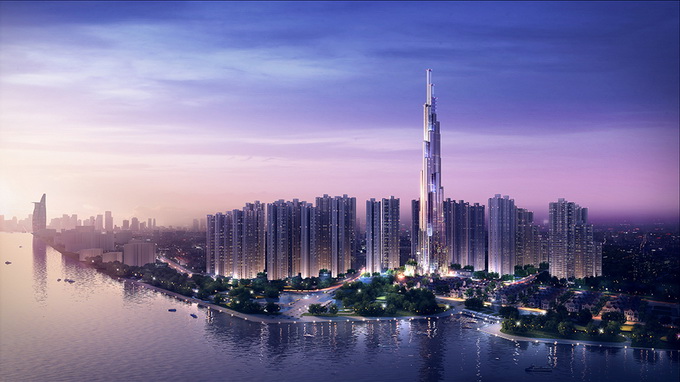 Vietnam to have new tallest building in 2017

Vietnam is expected to have a new tallest building in 2017, with an 81-story British-designed skyscraper now under construction in Ho Chi Minh City.

The Hanoi-based Keangnam Landmark 72 tower, which has 72 stories, will soon lose its ‘tallest building’ title to the Vincom Landmark 81 once the latter is completed.

British firm Atkins is the project’s lead architect, responsible for architecture and landscape design, whereas Arup, another British company, is in charge of structural design.

The Vincom Landmark 81 is one of many global projects on which the two British design companies are collaborating, Atkins said in a press release on Monday.

With an expected height of 460m, the building will be the tallest in the country and become a new icon on Ho Chi Minh City’s ever-growing skyline, according to Atkins.

Representatives from Atkins and Arup were among a group of businesses accompanying UK Prime Minister David Cameron during his visit to Vietnam last week.

The UK premier said the two architect firms are “leading the way in unlocking the potential for British businesses in Vietnam.”

“It’s a testament to their expertise that Ho Chi Minh City’s skyline will be shaped by British design, as they work on Vietnam’s tallest skyscraper,” Cameron was quoted as saying in the Atkins statement.

“I’m pleased they were able to join me on my trade mission as we look to further export UK excellence and forge stronger links with the fast growing economies of South East Asia.”

The 81-story development is located in Vinhomes Central Park – one of the prime locations in Ho Chi Minh City.

Its frontage faces the beautiful Saigon River, and is conveniently connected via major road and water transportation.

The high-rise will feature “a modern and unusual architecture design that symbolizes the diversity and fast-emergence of Ho Chi Minh City,” according to its lead architect.

The mixed-use Vincom Landmark 81 will consist of space for hotels, serviced residential apartments and retail, whereas a sumptuous shopping center will sit at the base of the skyscraper.

The 241,000m2 development will also boast contemporary landscape design that merges natural beauty into this building, according to Atkins.

“Our challenge was to create a unique and dynamic landmark tower design to support Vingroup’s vision for a high-end mixed-use development,” said Bertil de Kleynen, director of architecture and landscape for Atkins in Asia Pacific.

“The tower is integrated into the public realm that addresses sustainable design challenges at various interfaces of the project.”

De Kleynen added that the project marks “significant progress” for Atkins in Vietnam.

“We are extremely proud to assist our client Vingroup… in developing international standards and creating landmarks that will be viewed as part of a modern and integrated Vietnam,” he said.

Ho Chi Minh City, Vietnam’s commercial and financial hub, is undergoing a construction boom, with a number of high-rises already built, or scheduled to be erected there.

Construction of the Landmark 81 is slated for completion in 2017, according to Atkins.