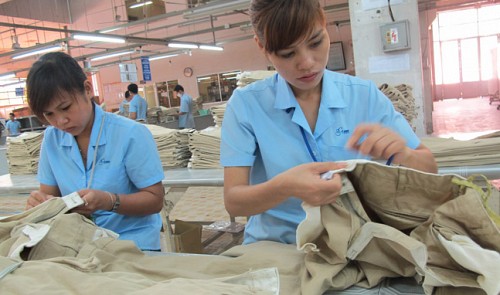 Vietnam’s trade deficit with ASEAN picks up since 2013

The deficit Vietnam runs with its Southeast Asian neighbors is going up as what the country has earned from exports are eclipsed by what it has paid for imports, according to newly released statistics from the General Department of Vietnam Customs.

Trade between Vietnam and ASEAN member countries has picked up since 2005, and so has the nation’s trade deficit with the group, which saw some brief declines in 2008-09 and 2011-13.

The value of two-way trade between Vietnam and other ASEAN countries quickened at an average of about 26 percent per year in 2005-08, according to statistics from the General Department of Vietnam Customs.

In 2009, influenced by the world economic crisis, Vietnam and ASEAN trade dropped 24 percent from the previous year to $22.89 billion.

However, during 2010-12, it rebounded at a double-digit growth rate of 19 percent per year. Specifically in 2012, total import-export turnover between Vietnam and the grouping topped $38.7 billion.

From 2013 to the present, bilateral trade between Vietnam and ASEAN has achieved positive growth, but showed some signs of slowing down.

Prior to 2010, Vietnam's main exports to ASEAN markets were crude oil and rice, accounting for over 50 percent of the total turnover.

Since 2010, Vietnamese shipments to the bloc have been diversified with many more products such as telephones and components, computers, electronic products and components, iron and steel, machinery, appliances and parts.