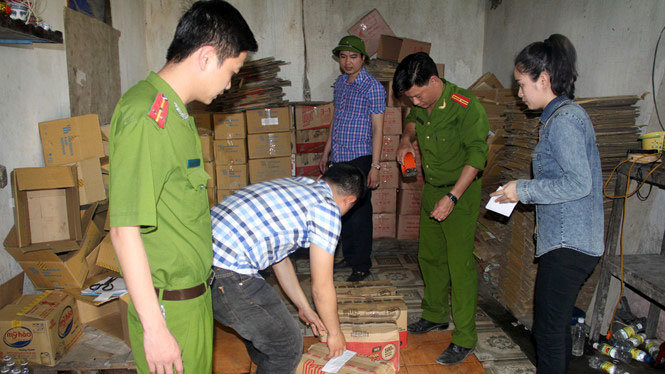 While vinegar does contain a few percentages of acetic acid, producing the liquid merely by mixing the acid with water is undoubtedly unacceptable.

But that is what Nguyen Thi Kim had been doing since September 2015, until she was caught in the act on Thursday.

Kim, 45, was producing ‘vinegar’ by mixing water with acetic acid at her facility in Vinh, the capital city of the north-central province of Nghe An, when environmental police stormed in.

The raid came shortly after officers caught a man named Le Van Thanh when he was carrying 30 barrels of the vinegar in the city.

The deliveryman failed to show any quality certification for the products, and ended up confessing to police he had sourced the vinegar from Kim.

Kim confessed that the ‘formula’ to make her ‘rice vinegar’ is mixing a liter of acetic acid with 100 liters of water.

She produced some 15 cardboard boxes, each containing 24 bottles, on a daily basis and sold them for VND25,000 (roughly US$1) per box.

The woman admitted to having made vinegar this way since September 2015.

Commercial vinegar is produced either by fast or slow fermentation processes. In the slow process, the fermentation proceeds slowly over the course of months or a year, whereas it only takes 20 hours to three days in the case of fast production.

Although it is classified as a weak acid, concentrated acetic acid is corrosive and can attack the skin.