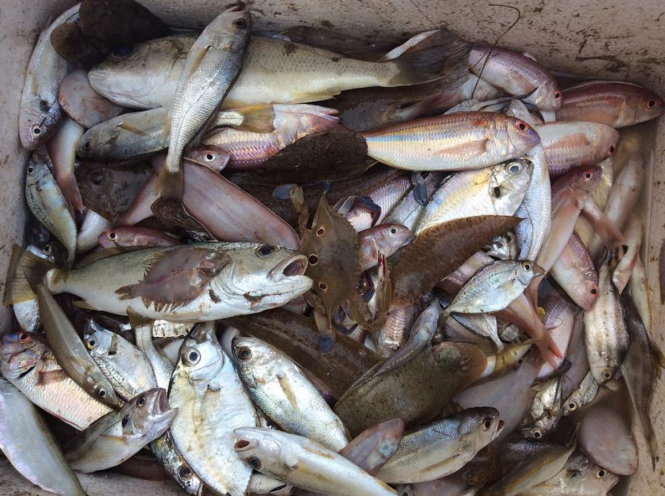 A man was found buying dead fish from fishermen at a beach in the north-central province of Quang Binh on Tuesday, following reports that the dead animals have become sought-after in areas hit by a recent spate of mysterious mass deaths.

The man was loading dead fish onto his refrigerator truck, parked along the beach in Quang Tho Commune, when environmental police officers and officials from the provincial environment department intervened.

The truck owner said he came from the neighboring province of Ha Tinh, and only meant to buy live and “nearly dead” fish for resale.

Environmental police officers eventually asked him to destroy all of the purchased fish and banned him from continuing to buy dead fish in the province.

Dead fish of various species and sizes have been seen scattered on several beaches in Quang Binh since Sunday. At the time they still looked quite fresh and had yet to begin rotting.

Quang Binh is one of several central provinces including Ha Tinh, Quang Tri and Thua Thien-Hue that have witnessed the mysterious mass fish deaths occurring since the beginning of this month.

The phenomenon appeared to have stopped for a while last week, but seemed to return on Sunday, with chemicals suspected to be at fault.

With traders bringing refrigerator trucks to Quang Binh to buy dead fish, the provincial administration on Tuesday ruled that collecting or using the dead animals in the province is now prohibited.

Officials from the department of environment said those fishermen who collect dead fish along the beaches to sell to traders are not local residents, but hail from Ha Tinh.

“They pick up live, nearly dead and dead fish to sell to traders who are waiting with their fridge vans,” Tran Dinh Du, deputy director of the province’s agriculture department, said.

The buyers, in the meantime, will either export the dead fish, or turn them into fish feed, said Nguyen Van Lao, chairman of Thanh Trach Commune in Bo Trach District., Quang Binh.

Quang Binh has destroyed dozens of metric tons of dead fish since the beginning of this week.

Du, the deputy director of the agriculture department, admitted that burying the dead fish and disinfecting them with lime are not a safe enough method.

“But we do not have a better choice,” he said. “We must know what kind of chemical has led to the fish's death, in order to use the proper detoxification approach.”

Concerns have emerged that the dead fish will be sold to southern markets, including Ho Chi Minh City, or turned into fish sauce.