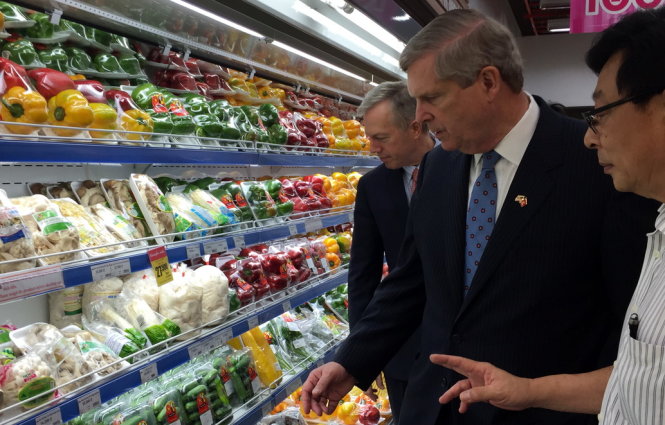 Vietnam’s green produce has real chance in US: agriculture secretary

Vietnam has increasingly seen U.S. demand for its agricultural products rise, and has the chance to penetrate this market thanks to the Trans-Pacific Partnership (TPP) trade deal, U.S. Agriculture Secretary Tom Vilsack said on Tuesday.

Among the Vietnamese green produce, mangoes have emerges as the fruit to win over American consumers, Vilsack told reporters in Ho Chi Minh City, after touring an outlet of Vietnam’s leading supermarket chain Co.op Mart.

Mango is not grown in the U.S. so Vietnamese businesses have an opportunity to sell this fruit to America, he explained.

The agriculture secretary was on a Monday - Thursday visit to Vietnam to discuss the details of the U.S.-led TPP agreement with his Vietnamese counterparts from the Ministry of Agriculture and Rural Development, and the Ministry of Industry and Trade.

Vietnam, the U.S. and ten other Pacific Rim countries signed the TPP on February 4 in Auckland, New Zealand, after seven years of negotiations that ended in October 2015.

The accord, which would liberalize trade in 40 percent of the world’s economy, has not yet come into force, pending ratification in each member country.

Once the TPP takes effect, the U.S. is expected to drop up to 90 percent of the tax lines for Vietnamese goods, which Vilsack said will make Vietnam’s produce more competitive in the U.S. market.

On the other hand, Vietnam will also reduce and eventually eliminate tariffs across a broad range of food and agricultural products, which will help put U.S. exports on a level playing field and give the United States a leg-up on non-TPP competitors.

Vietnam's average tariff on U.S. agricultural products is 16 percent, while the average U.S. tariff is five percent, according to the U.S. Department of Agriculture.

The Southeast Asian country remains one of the fastest-growing markets for U.S. food and agricultural products, with U.S. exports totaling US$2.3 billion in 2015, a massive 357 percent increase from 2007, when Vietnam joined the World Trade Organization (WTO), the department said in a press release on Monday.

Vietnam has so far managed to sell rambutan, longan, litchi and dragon fruits to the U.S., with local exporters lamenting the fact that the licensing process remains lengthy, complicated and costly.