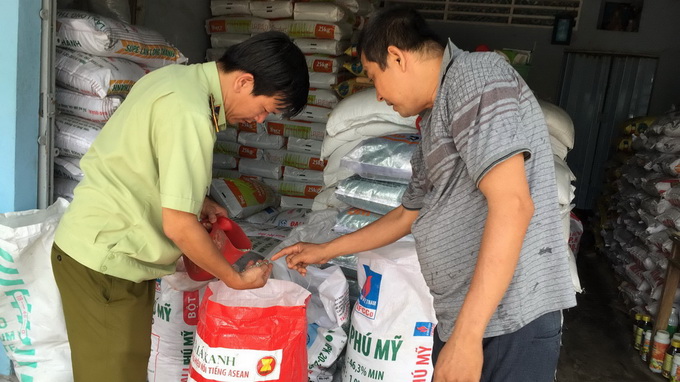 Fake, substandard fertilizers on the rise in Vietnam

Farmers in Vietnam are finding themselves unsure of which fertilizer brands to trust after a recent watchdog report announced that as many as 1,000 metric tons of fake or substandard fertilizers are confiscated every year.

Data recently released by the Market Surveillance Agency under the Ministry of Industry and Trade indicated that the market watchdog identifies and handles over 3,000 cases of fertilizer quality violations annually, leading to over 1,000 metric tons of fake or substandard fertilizer being seized.

The agency added that this is just the number of identified cases and the actual numbers may be significantly higher.

According to estimations by the Vietnam Fertilizer Association, the country’s economy loses US$2 billion every year as a result of fake fertilizer.

Accounting for 50 percent of input costs in agriculture and playing a crucial role in crop yield and quality, the emergence of fake fertilizer is hurting farmers and authentic businesses.

According to local market surveillance bodies, fake fertilizer manufacturers use many different techniques to cheat customers, including the use of formulas that differ from what is printed on the package and imitating established market brands.

D., director of a fertilizer manufacturer in Ho Chi Minh City, said his company has been struggling to cope with another firm copying their brand for malicious purposes.

The owner of the counterfeit business, D. said, had been his former employee before quitting and opening his own business, the name of which is simply a reverse from his company’s name.

D. said he has been summoned many times by authorities to answer for lawsuits filed by tricked customers, though the scam was, in fact, perpetrated by the other firm.

“It didn’t stop there. Every time we introduced a new product, they would copy our move and introduce a new one of their own that looked very similar to ours, despite their lack of the appropriate technology to reproduce our formulas,” D. said.

Nguyen Van Viet, chief inspector at the Ministry of Agriculture and Rural Development, said that fake fertilizer is a field of concern for the ministry in 2016, alongside the use of banned chemicals in animal husbandry.

The chief inspector added that the ministry plans to increase the frequency of surprise inspections throughout the year in order to crack down on illicit business practices.