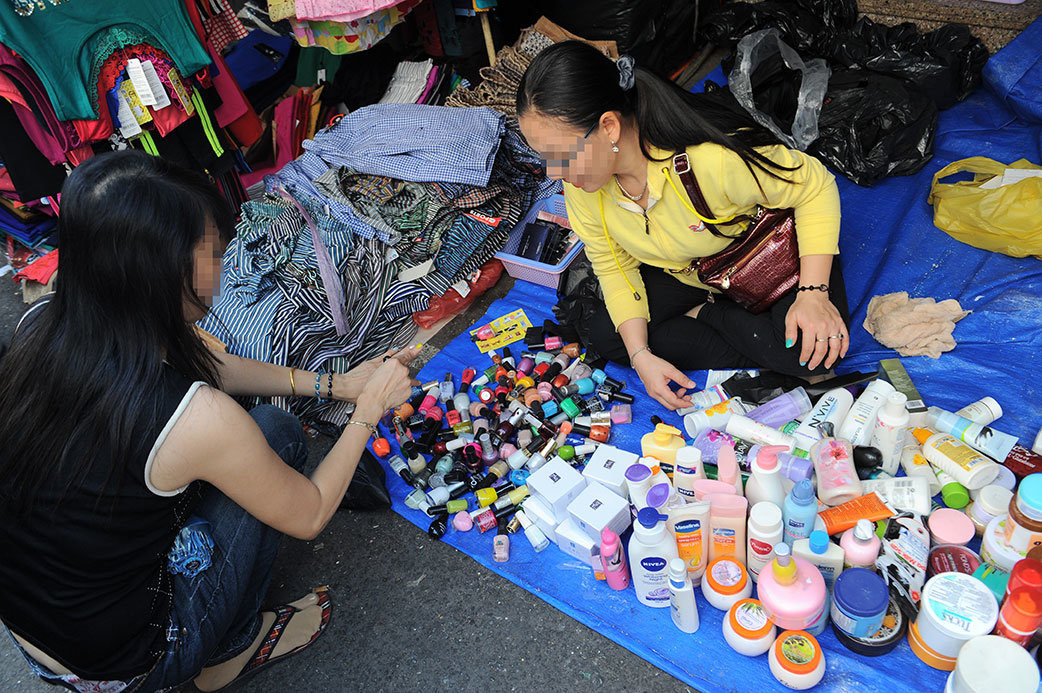 Cheap cosmetics that are ‘unofficially’ imported into Vietnam have increasingly become consumer favorites, yet are more than likely low-quality, counterfeit versions of famous brands.

Locally referred to as ‘my pham xach tay,’ which means portable goods flown into the country in carry-on luggage, they are not subject to expensive import tariffs.

With Vietnamese people paying more attention to their appearance, such cosmetics have been in high demand despite their risks.

The beauty goods are sold openly at markets, overwhelming buyers with the sheer variety of products claimed to be imported from the United States, South Korea, Japan, or elsewhere.

At one corner stall in Tan Dinh Market in District 1, Ho Chi Minh City, lipsticks, eyeliners, face powders and body lotions are all among the products on offer.

She directed her buyer’s attention to the Japanese letters on the product labels to guarantee their origin, reiterating that they were of high quality.

The quality is similar to that offered in official stores, the vendor asserted, explaining that it was sold at a cheaper price because it was ‘hang xach tay.’

Quynh Chi, owner of an online cosmetics shop, said that the products are often brought to Vietnam in passenger luggage or through transport services.

Some people even organized trips to foreign countries to buy their merchandise, Chi continued.

According to Chi, who lived in Japan for a period of time, beauty products in the East Asian country can be faked, but the quality is not always the same as the official goods.

Consumers are sold on the authenticity of the products when they look at the foreign labels, not realizing that these product guarantees can be counterfeited as well, said Thanh Thinh, director of a distributor of imported products.

Consumers' blind preference for foreign merchandise has contributed to many being unaware of the potential for the goods being of low quality, Thinh elaborated.

Fake goods are hard to identify without the evaluation of competent authorities, she added.

According to other experts, purchasing portable beauty products from online shops in Vietnam also poses other risks, including non-existent refund policies and incorrect orders in terms of sizes and colors.