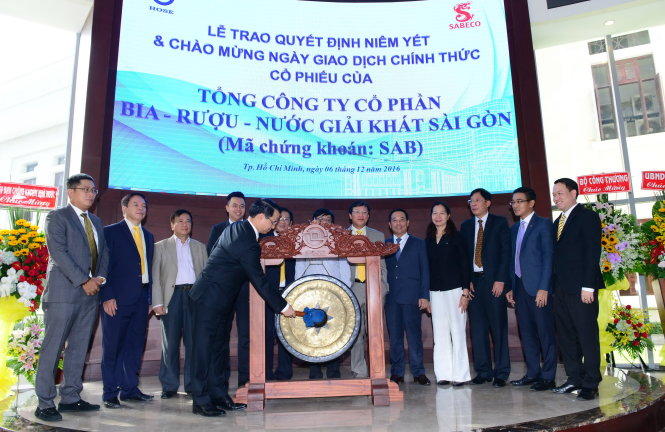 HANOI, Dec 6 - Shares of state-controlled Sabeco, Vietnam's biggest brewer, jumped the maximum allowed 20 percent upon listing on Tuesday as investors craved exposure to the dominant player in one of Asia's most sought-after beer markets.

Sabeco, with a share of nearly 41 percent of the domestic beer market, is one of the last profitable assets owned by the Vietnamese government, which has said it would sell its entire 89 percent in the company by 2017.

Vietnam has been seeking to accelerate the initial public offerings (IPOs) of state-owned companies and list shares to boost investment and increase transparency.

The stock market debut of Sabeco, known for its Bia Saigon and 333 brews, had been moved forward from an initial plan of Dec. 12, when the country's state investment firm plans to sell a 9 percent stake in Vinamilk, the top dairy product maker.

"Sabeco is the sector's leader, having an advantage of owning a chain of plants lying along the country," BIDV Securities said in a note to clients on Monday. The brokerage has a target price of 168,653 dong on the stock.

Vietnam's annual beer output is projected at 4.1 billion litres for 2020, up 21.7 percent from 2015, according to an Industry and Trade Ministry's masterplan approved in September, suggesting an annual average growth of around 4 percent.

But the sector's growth could be hindered by policy risks, including higher special consumption tax and plans to limit alcohol use at night time, Saigon Securities said in a Monday report on Sabeco's listing.

On Tuesday, volume on Sabeco was thin, with just 3,000 shares traded, the data showed. The Ho Chi Minh City's bourse allowed the stock price to move a maximum of 20 percent either side of the starting price on its debut day.

The benchmark stock index, which hit an eight-and-a-half-year high on Sept. 28, eased 0.8 percent by 0430 GMT after opening slightly up following Sabeco's listing.