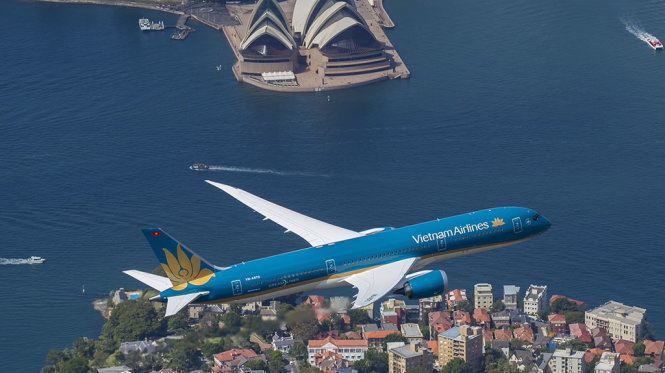 Vietnam Airlines completes switch to Boeing 787 for all Australia flights

National flag carrier Vietnam Airlines has switched all of its Australia flights to Boeing 787 operations in celebration of the 20th anniversary of the Vietnam-Australia direct route.

The airline’s first 787 flight to Melbourne landed at Tullamarine Airport on Monday, while another 787 jet had touched down at Sydney’s Kingsford Smith Airport on Friday, marking the carrier’s switch to the next-generation Dreamliner for both of its Australian destinations.

The switch is a part of the airline's celebration of its 20th year of operating non-stop flights to the Pacific neighbour.

The state-owned airline currently operates 14 flights a week to the two Australian cities.

Truong Tran Ngoc Hung, a Vietnam Airlines senior representative in Australia, said the event was a milestone in the carrier’s operation in the “dynamic” international carrier market.

“With daily flights between Vietnam and Australia, we commit to the delivery of quality service for Vietnamese expatriates in Australia, as well as the promotion of tourism and trade between the two nations,” Hung said.

The state-owned carrier also revealed a plan to renew its fleet by gradually replacing long-distance jets with Boeing 787 Dreamliner and Airbus A350-900 XWB aircraft.

The next-generation jet can carry between 210 and 330 passengers, and is Boeing’s most fuel-efficient airliner to date.