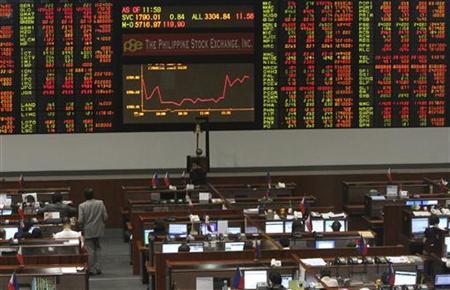 Southeast Asian stock markets took a breather on Tuesday as investors took to the sidelines in the absence of market-moving, macroeconomic events.

Asian peers, particularly MSCI's broadest index of Asia-Pacific shares outside Japan bounced back after two days of falls, rising as much as 0.89 percent in their biggest intraday gain since Nov. 22, on strong gains on Wall Street.

"Markets are moving sideways because of a lack of fundamental, market-moving news," said Victor Felix, an equity analyst with Manila-based AB Capital Securities.

"The Philippines, in particular, is disconnected from Wall Street directions, notably after the U.S. election. We are probably seeing some rebounds from Monday's sharp drop."

"The (Sabeco) stock, which is listing today, is being eagerly sought. This may be leading to some selling of other issues to raise cash," said Fiachra Mac Cana, managing director and head of research at Ho Chi Minh Securities.

Industrials and financials underperformed other sectors, with real estate company An Duong Thao shedding as much as 7 percent to a record low in moderate trading, making it the biggest percentage loser.

Packaging products maker S. Pack & Print Pcl  surged as much as 28.7 percent to hit its highest in over a year.

Indonesian shares extended their bull run into a sixth session, with financials accounting for more than half of the gains.

Bank Of India Indonesia soared 23.4 percent to hit its highest in around eight months in very thin trading.

Singapore and Malaysia were flat with an upside bias, in lacklustre trading.