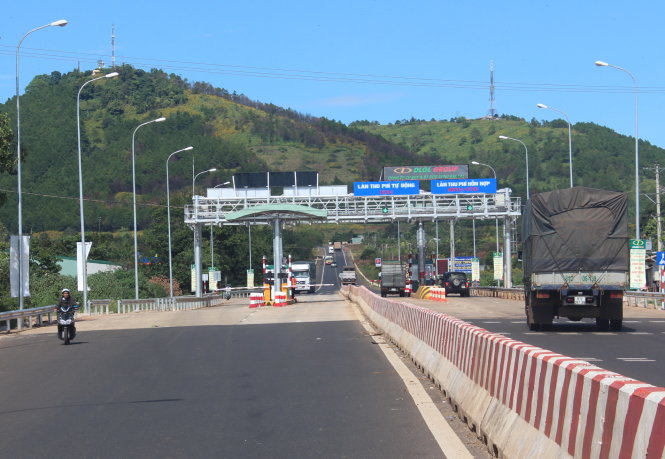 Multiple road and bridge projects in Vietnam are applying toll-collecting periods that are up to 13 years longer than they should be, the country’s state auditor has said.

The State Audit Office of Vietnam (SAV) has inspected 27 toll roads developed under the BOT (build-operate-transfer) scheme countrywide and come to the conclusion that most of them have unnecessarily long fee-collection periods.

“Those toll periods could be slashed by ten months to 13 years from the developers’ financial plans without affecting their investment recouping,” deputy auditor-general Nguyen Quang Thanh said in a report to the National Assembly Standing Committee on Tuesday.

According to the SAV report, if those projects reduce their toll periods as suggested, the total amount of time saved will be more than 100 years.

“You have more than 100 years of toll after looking into only 27 projects,” Nguyen Van Thanh, chairman of the Vietnam Automobile Transportation Association said, implying that a number of similar projects across the country may be collecting tolls longer than they should.

“So will the SAV suggestion to cut those toll periods be met? And will any organizations or individuals be held responsible?” he questioned.

Of the 27 audited projects, one road in the central province of Quang Nam was found to have fully recouped investment but refused to stop collecting a toll, according to the report.

This toll road in Ho Chi Minh City should cut the fee-collection period by 11  years.

The SAV audit report also pointed out that many toll booths have been incorrectly placed, taking a toll on vehicles that have to pass them on a daily basis.

Despite a rule stipulated by the finance ministry that any two toll booths should be at least 70km apart, there are many facilities located within this distance following agreements between the finance and transport ministries and local administrations.

Moreover, there are cases when a toll booth for one road is located on another road, meaning people have to pay the fee even when they do not use the infrastructure.

The state auditor has also said that many roads which used to be toll-free have been selected to undergo “upgrade or renovation” under the BOT scheme, while there is no set of standards as to which facilities should be upgraded and become toll roads.

“People traveling on toll-free roads will all of a sudden have to pay a fee when the facilities become toll roads,” the SAV explained.

The state auditor therefore suggested that the government stipulate that only newly built facilities be developed under the BOT scheme.

“In the case of upgrades, the BOT should only be applied when the road to be improved is not the major access of local residents, so they will have other choices, instead of having to travel via that toll road,” the SAV said.