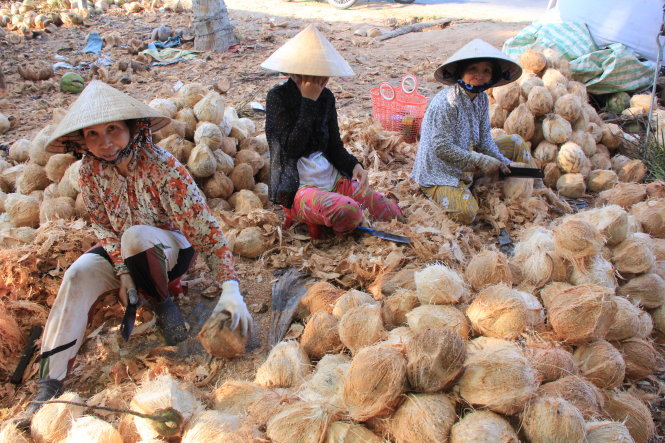 Coconut processing companies in the southern province of Ben Tre, known as Vietnam’s ‘coconut kingdom,’ have had to resort to imported products to alleviate short domestic supply.

While the Mekong Delta province used to be home to vast coconut plantations, local farmers are considering switching to other crops as coconut prices have fallen and the fruit’s yield has also become increasingly poor.

Local coconut processors have had to import the fruit in order to have enough raw material for production.

Nguyen Van Bay, one farmer in Chau Thanh District, said he could only harvest 300 coconuts from his one-hectare plantation, compared to approximately 1,000 in previous years. The crop of Huynh Phuc Hau, from nearby Giong Trom District, also saw its yield drop 50 percent from last year.

Besides the poor yield, coconut crops in Ben Tre have also been affected by salinization, resulting in smaller fruits.

With coconuts proving to be less lucrative, local farmers are switching into other plants including mango, longan fruit and grapefruit, Tran Anh Tuan, chairman of the Ben Tre Coconut Association, said.

“This is the primary reason behind the raw material shortage for local coconut processing companies,” Tuan said.

“Some businesses have had to source their fruit from other provinces, and even import from other countries.”

Another factor is Chinese traders that bought huge quantities from Ben Tre earlier this year, he added.

Cu Van Thanh, director of Luong Quoi, one of the province’s largest dry coconut processors, said the company needs around 600,000 fruits per day, but domestic supply is currently failing to meet this.

“We have to import to have enough material,” he said.

“Last year we imported as many as 20 containers of dry coconuts from Indonesia.”

Tuan then suggested that fruit processing companies join hands to encourage farmers to stay with coconuts and ensure a stable domestic supply.

“If all farmers turn their back on coconuts, businesses will have to fully import the fruit in order to maintain their production,” he warned.