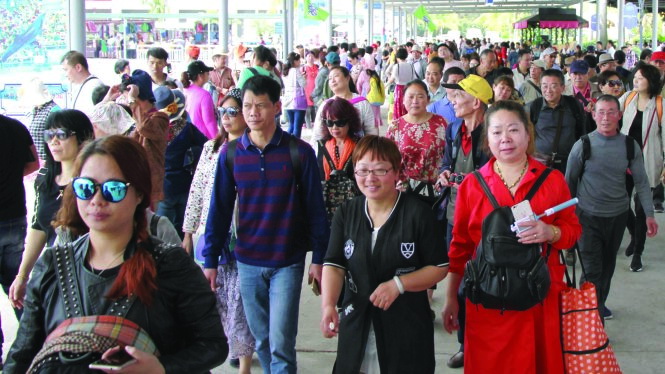 Quang Ninh Province, which prides itself on the UNESCO-recognized Ha Long Bay, has received thousands of Chinese holidaymakers to spend the weekends in March, which has brought both opportunities and challenges to local tourism agencies.

The Mong Cai border gate, the main entrance for Chinese tourists to get to the northern Vietnamese province, normally welcomes 8,000 to 10,000 entries a day, up to 3,000 of which are from China.

However, over the last weekends, the number of visitors passing Mong Cai spiked to 15,000 a day, with Chinese arrivals accounting for up to 70 percent.

On the morning of March 25, a 45-seater tour bus was spotted every two to three minutes at Tuan Chau International Port in Ha Long City, the province’s capital city.

Most of the excursionists were from China.

In less than three hours, more than 250 orders were issued to tourist ships to dock and cater to 5,000 tourists.

The crowds even bulged toward noon.

The waiting lounge teemed with commotion and dialog, mostly in Chinese.

The parking lot was packed with more than one hundred 45-seater buses carrying Chinese tourists.

Groups of Chinese tourists are a common sight along Ha Long-Cai Dam Streets in Bai Chay Ward as they take a stroll and do the shopping, particularly in the late evening, when Ha Long Bay is closed to visitors at the end of the day.

According to Dang Tuan Ha, vice-director of Tuan Chau International Port, the locality normally received less than 3,000 tourist arrivals per day in March in previous years.

Vu Duc Truong, one of the tourist accommodation providers in Ha Long City, said Chinese arrivals have surged by over 30 percent against the same period last year.

“Chinese vacationers have booked all of our 300 rooms. They typically check in at around 7:00 pm or 8:00 pm and check out early the next morning,” he added.

Nam, owner of a boat which usually carries Chinese holidaymakers, noted a 50-percent spike in contracts in March compared to the post-Tet (Lunar New Year) period.

A tourism expert attributed this rise to the soaring travel demand among Chinese nationals, particularly after rumors have circulated that China has banned its citizens from going on trips to South Korea.

Industry insiders have attributed the unusual spike of Chinese arrivals to Quang Ninh to the fact that travel firms in China are offering affordable tours to the Vietnamese province at this time of the year, so middle-income Chinese holidaymakers have grabbed the opportunity to travel.

Trinh Dang Thanh, vice-director of the Quang Ninh Department of Tourism, embraced the influx as a great opportunity to boost the provincial tourism sector and prove its magnet to international travelers.

The surge in tourist numbers will also add a considerable amount in terms of border entrance fees to the province’s budget, and lure investors to build hotels, resorts, offer recreation services and improve traffic infrastructure.

A female tour guide (holding the flag) is seen guiding a group of Chinese vacationers in Ha Long City during a weekend in March 2017. Photo: Tuoi Tre

“This will help accelerate the economic shift from the mining industry to tourism, and create jobs for many locals,” he stressed.

Thanh, however, admitted the incursion might bring problems and worsen services without proper management.

“Overcrowding may put pressure on environmental protection, security and order. A number of service providers have not operated properly or adopted ploys to lure guests, marring the overall tourism environment,” he added.

Many shops selling food and souvenirs to Chinese vacationers have also showed signs of dishonesty.

A big issue for local tour operators are the dirt cheap prices offered by Chinese tour organizers that spare the tourists from all costs except airfare.

These organizers will squeeze the remainder from their customers during the actual trip.

Illegal Chinese guides take the tourists to affiliate shops where they are ripped off and the extra money goes into the pockets of the tour organizers and guides.

Many of such Chinese-run shops often change their illegal status and names, while Chinese tour guides use fake guide certificates or none at all, particularly on peak days.

At a recent meeting addressing tourism issues, Nguyen Duc Long, chairman of the Quang Ninh People’s Committee, initiated a campaign to rid the local tourism environment of undesirable activities and restore its image.

Competent agencies will carry out tight inspections on travel firms and impose stringent sanctions on violators.

“We need to clearly define the market and take proper care of Chinese tourists. We should never dismiss them as cheap holidaymakers as they usually book high-class hotels and their overall expenses are high,” one of them said.

Speaking to Tuoi Tre, Ngo Hoai Chung, deputy head of the Vietnam National Administration of Tourism (VNAT) under the Ministry of Culture, Sports and Tourism, asserted measures must be taken to ensure no discrimination against any group of tourists and all vacationers can enjoy their stay in Quang Ninh to the fullest.

The VNAT had a working session on March 22 with the province’s leaders to better tackle the situation.

He called for better state control and closer inspection as well as measures to raise awareness among local people and service providers so that they will not collude with fraudulent Chinese counterparts to do harm to their own country’s tourism industry.