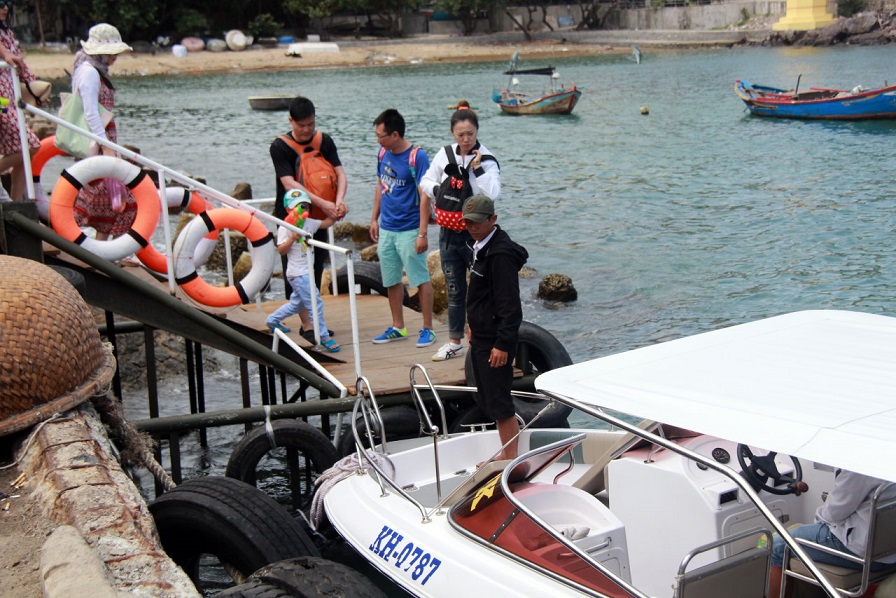 Despite more Chinese visiting the famous beach city of Nha Trang in south-central Vietnam, no real profit has been brought to local tourism.

Many tourist companies in Nha Trang, which is the capital of Khanh Hoa Province, have complained that the surge in Chinese guests had only benefited travel agents from China.

To gain some insights into the situation, Tuoi Tre (Youth) newspaper reporters followed a group of Chinese tourists to a shop that sells rubber pillows and mattresses.

Covering some hundreds of square meters, the store was filled with customers who were required to wear colored tags for better management.

Vietnamese visitors or travelers in smaller groups are often restricted from the store.

The interior of the shop was decorated with photos of vast rubber tree plantations in Vietnam, while a wide variety of products were displayed for shoppers to browse.

The Chinese buyers only paid via bank cards or their China-based tour operators. No cash in Vietnamese currency was used in the transactions.

Information on the merchandise showed that the producer is based in Hanoi while the products originate in China.

According to its manager, the shop operates with a legitimate license and always pays sufficient tax.

Explaining why Chinese goods were sold at the facility, the shopkeeper said Chinese manufacturers “have better production technology.”

He added that it was not necessary to declare their product prices to local authorities.

A probe later showed that many other shops were operating in a similar manner.

A representative of a local travel agency said all hotels rated two stars and above had been fully booked.

However, in their reports to competent agencies, the hoteliers often stated only 60 percent of the rooms had been occupied.

These hotels oftentimes sell their rooms in large numbers at a very cheap cost to Chinese tour operators, who later raise the price in their contracts with travelers.

These travel agents sometimes boast that the Vietnamese hotels which they have signed deals with are rated three or four stars, whereas the actual ranking is just two stars in order to dupe vacationers into paying more than they should.

The discrepancy is pocketed by the Chinese operators and their partner hotels in Vietnam.

A number of local businesses have “ignored business rules” to ink deals with Chinese companies due to the lucrative benefits, Han continued.

For a better tourist industry, authorities should learn from Thailand, where local businesses are put in charge of organizing tours for Chinese visitors for better control and quality assurance, he said.

The leader of another Nha Trang-based travel firm suggested that new services and attractions should be offered to foreign visitors to bring more profits to local tourism.

Tran Viet Trung, director of the Khanh Hoa Department of Tourism, said that a surge in the number of Chinese tourists since 2016 has caught local authorities off guard.

The agency has promulgated a set of regulations for better management of the quality Nha Trang tours provided by foreign companies, Trung continued.

It will cooperate with the provincial Department of Industry and Trade to manage local stores that are usually visited by Chinese tourists to ensure the facilities meet requirements regarding quality, price, and tax.