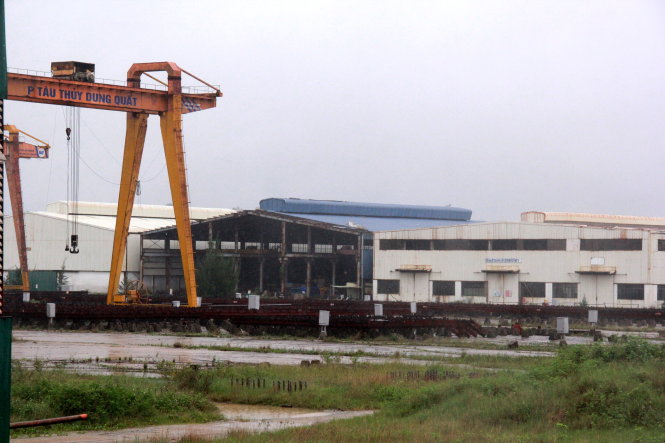 An investment of nearly US$225 million by state-run PetroVietnam, made to revitalize a struggling shipbuilder, is likely to become money down the drain as the loss-making firm is on the verge of bankruptcy.

In 2010, PetroVietnam, the country’s oil and gas giant, acquired the Dung Quat Shipyard (DQS), located in the central province of Quang Ngai, from Vinashin, another state-run company that collapsed due to heavy losses the following year.

In October 2013, Vinashin was ‘revitalized’ and renamed the Shipbuilding Industry Corporation (SBIC), with some of its subsidiaries, sharing the fate of DQS, transferred to other state-run enterprises.

Upon the DQS acquisition, PetroVietnam’s leaders said they were committed to revitalizing the shipbuilder, and making it a profitable business.

However, seven years on, PetroVietnam has proposed either ‘returning’ DQS to SBIC or declaring bankruptcy.

However, seven years later, despite the money and effort spent, the shipbuilder’s debts have risen to VND6.9 trillion ($303.96 million), which are in addition to a negative equity of VND1,152 billion ($50.75 million).

PetroVietnam had hoped that DQS would maintain operations by building ships for subsidiaries of the oil and gas company; however the shipbuilder has received no orders and 70 percent of its facilities, equipment and machinery are left unused.

A large number of workers have also been temporarily laid-off as there is no work to do, with many asking to quit DQS in order to seek jobs at other companies.

DQS is among 12 loss-making projects that the Vietnamese government called on the country’s Politburo, the most powerful branch of its political system, to make a decision on last month.

In a report submitted to the lawmaking National Assembly earlier this month, the Ministry of Industry and Trade, which manages PetroVietnam, said there are three solutions.

PetroVietnam should either find a new owner for the debt-ridden shipbuilder, continue pumping money in order to ‘restructure’ it, or complete the procedure to declare bankruptcy.

The trade ministry has said the insolvency solution should be prioritized, even though it means PtroVietnam’s VND5.1 trillion ($224.67 million) investment will become a waste.

Hai acknowledged concerns that bankruptcy would result in 1,200 workers losing their jobs, but “this is still better than losing more state capital – or taxpayers’ money – on the loss-making shipbuilder.”

Even so, DQS leaders have claimed that the company is operating normally.

“Things have only gotten difficult,” Tran Minh Ngoc, chairman of DQS’s board, told Tuoi Tre (Youth) newspaper on the phone on Tuesday.

While Ngoc admitted that the company had been forced to temporarily lay off workers, he claimed that “this is a common hardship for the whole shipbuilding sector.”

“If the market becomes more arduous, we may declare bankruptcy – but not for the time being.”