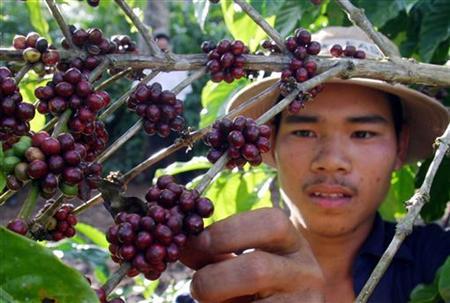 Indonesia's robusta grade 4, 80 defects was quoted at a discount of $30 per tonne to the July contract, unchanged from last week, amid high supply as the harvest season peaks, traders in Lampung said.

In Vietnam, the world's top robusta producer, the 5 percent black and broken grade 2 robusta was quoted at $10-$20 premium per tonne to London's ICE September contract, compared with a $20-$30 premium a week earlier.

However, overall coffee prices still rose due to a 3.3-percent jump in the London contract since last Wednesday.

Despite higher prices, trading was still quiet due to a lack of high-quality beans.

"Traders were afraid there's not enough high-quality beans to provide to foreign importers, that's why they were reluctant to conclude deals despite better prices," said independent analyst Nguyen Quang Binh.

Vietnamese coffee exporters, faced with dwindling robusta supplies, are paying up to buy beans from international trade houses who scooped up much of the crop early in the season.

Vietnam customs said the country exported 122,000 tonnes (2.03 million 60-kg bags) of coffee in May, down 9.4 percent from a month earlier, and slightly above the government estimate of 120,000 tonnes.

Traders expected Vietnam's coffee exports to touch 90,000-120,000 tonnes in June while the U.S. Department of Agriculture forecast Vietnam's 2017/2018 harvest to increase 10 percent annually to 28.6 million bags of coffee, or 1.72 million tonnes, due to favourable weather in the first half of the year.