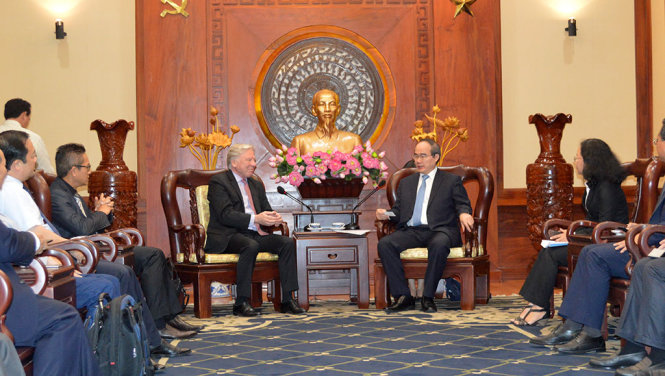 Microsoft could cooperate with Ho Chi Minh City authorities in multiple ways to improve city dwellers’ life quality through IT advances, the municipal Party chief said as he received an executive of the U.S. tech giant on Friday.

At the reception for Stefan Sjostrom, Vice President for Public Sector, Asia at Microsoft, Nguyen Thien Nhan, secretary of the municipal Party Committee, underlined that the city and the software behemoth should boost collaboration in IT application.

The Ho Chi Minh City’s top leader hailed Microsoft’s positive participation in developing technology and high-quality human resources in Vietnam, particularly in his city, over the past 20 years.

Nhan told his guest that Ho Chi Minh City, as the country’s economic and tech hub, wants to become a smart municipality with tech-based solutions for such issues as environment protection, administrative transparence and life improvement.

The Party chief thus expressed his hope that the U.S. company will collaborate with the city on IT personnel training and boosting the application of tech advances such as artificial intelligence to make life of every city citizens better.

The visiting Microsoft representative told his host that he is impressed by the city’s vibrant development and its steady foundation of IT human resources and infrastructure.

Sjostrom asserted that Microsoft wishes to cooperate with Ho Chi Minh City in the IT sector in a closer and more effective way.

He added that Microsoft is slated to work with relevant agencies in Ho Chi Minh City on a cooperation strategy by 2020 in the coming time.

Once implemented, the strategy will help promote information technology transfer not only in Ho Chi Minh City but all localities nationwide.