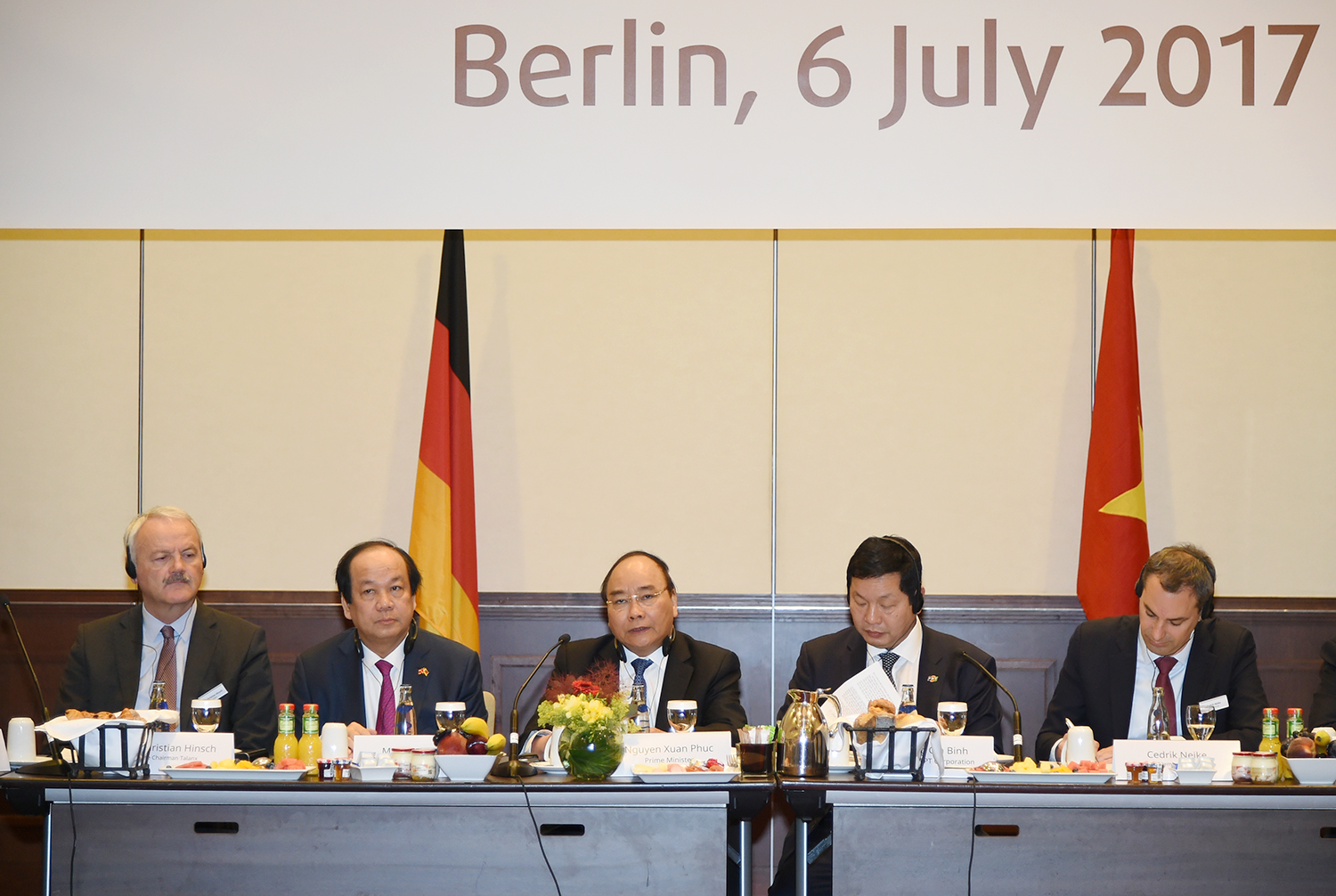 German businesses should increase investment in Vietnam and reap the certain rewards, Vietnamese Prime Minister Nguyen Xuan Phuc underlined at a dialogue with local enterprises in Berlin on Thursday.

Addressing an audience of 30 leading German businesses operating in the fields of information technology, finance, healthcare, agriculture, and hi-tech industry, the Vietnamese premier said that bilateral trade between Vietnam and Germany is far below its true potential.

“The trade value is only a bit more than US$9 billion,” he said. “As a leading industrial country in Europe, Germany should invest more in Vietnam.”

The meeting in Berlin was held as part of the Vietnamese premier’s July 5-8 visit to Germany.

PM Phuc held similar events during his visit to the U.S. in late May and to Japan in June. Both efforts had near immediate payoffs.

“Since my trip to Japan, Japanese investors have pledged a total investment of $22 billion and the figure since my U.S. visit is $10 billion,” Phuc told the German businesses, before calling on them to trust Vietnam as a profitable investment destination.

“Put trust in Vietnam and all sides will win,” he said.

The prime minister asserted to his German audience that Vietnam is a dynamic economy with rapid growth, a stable macro-economy, and a favorable business environment.

“Germany is one of Vietnam’s prioritized partners for the fourth industrial revolution, so Vietnam and Germany could promote cooperation in such potential arenas as trade, investment, training, energy, tourism, and information technology,” the PM suggested.

German firms said during the dialogue that they also wish to cooperate with Vietnam in such aspects as healthcare, education, training, hi-tech agriculture, renewable energy, and smart power-saving solutions.

Cedrik Neike, member of the managing board of Siemens, said his company is keen to partner with Vietnam in the provision of green energy and healthcare services.

Siemens and other German firms are also interested in Ho Chi Minh City’s subway project and the manufacturing of gas-fuelled turbines in Vietnam, he added.

Julio Triana, chief financial officer of Bayer Healthcare Pharma, said the company, having been present in Vietnam for 20 years, hopes to make stronger investment in Vietnam’s healthcare and agriculture sectors.

In the meantime, Philips Lighting DACH is willing to invest in human resource training and the development of smart cities in Vietnam, according to CEO Karsten Vierke.

Vierke told the Vietnamese PM that his company’s latest technology can reduce electricity use by 65 percent.

The Vietnamese head of government spoke highly of the suggestion, expressing his hope that Philips Lighting DACH will soon cooperate with Vietnam to implement the project in major cities.

PM Phuc also welcomed the German investor Deustche Bank to invest in the field of finance and stock trading and called for German investment in improving Vietnam’s healthcare services, including the production of high-quality medicine at affordable prices.