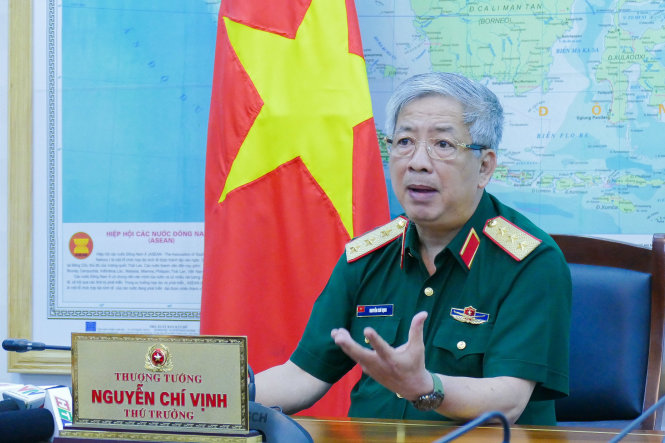 The Vietnamese military needs to get involved in business activity, but the scope of it is larger than the public may understand, Deputy Minister of Defense Nguyen Chi Vinh has said.

Vinh joined Tuoi Tre (Youth) newspaper in an interview amid public debate as to whether the military should pull out of economic activities in order to stay focused on its national defense role.

“The notion of ‘the military being involved in economic activity,’ does not fully reflect the reasons as to why the military has to do business,” Vinh said.

“The truth is that the military does business to serve its national defense role on the one hand, and contribute to the country’s economic development on the other.”

“The extent to which the military practices business varies between wartime and peacetime, and depends on the economic status of the country,” Vinh elaborated.

He also addressed other questions from Tuoi Tre to give a clearer picture of how the military is doing business and why it is necessary for the armed force to maintain that role outside of its national defense duties.

Members of the military-run telecom Viettel (in uniform) are seen during a contract signing ceremony.

* Can you specify the current economic activities of the military?

First of all, there are plants and factories that directly produce and manufacture national defense products, such as weaponry and defense equipment.

As our country continues to develop and face imminent threats from outside forces, it’s a must that the military be strong enough to ensure peace for the country and be ready to successfully counter any negative situations that come to light.

Consequently, enhancing the national defense capacity, especially strengthening the ability of the defense industry and its weaponry, is a strategic task for the whole country.

To this end, our defense industry and defense plants and enterprises are required to improve and modernize, constantly updating and enhancing their technology and science, and to try and be less financially reliant on the state budget. Who will fulfill these tasks, if not the military?

Defense manufacturing has its own exclusive characteristics. Military-run factories do not produce defense products en masse and then put them back in the warehouse to prepare for warfare; instead, they need to maintain production and innovate in order to meet the rising demand of the military.

The military must continue carrying out its economic activity in order to meet these requirements.

For instance, during peacetime, one defense plant only needs to make enough products to meet the requirement of training, but in the event of war, it must be able to increase production by ten or a hundred times to meet new demand.

* During peacetime, what will the machinery, workers and experts at these defense factories do?

This workforce will use the machinery and facilities to produce dual-purpose products, usable for both defense and civil needs.

This will bring in revenue to fund their plans to modernize production lines and at the same time allow workers to regularly practice and improve their skills.

This also encourages members of the workforce to stay with the military. This is important. Imagine few experts would want to work at the defense plants, while the workers, whose skills are not regularly sharpened, become unfamiliar with the machines; what happens when we suddenly require a huge volume of defense products?

* Any other activities besides these defense-purpose plants?

In the 1980s, when all of Vietnam’s northern and southern borders were free from war, the armed forces began to reduce troops stationed there. On these borders, there were dozens of military divisions. The soldiers stationed were tasked with protecting the borders, and at the same time helping locals in their economic and social development.

In this context, dozens of thousands of soldiers have temporarily put down their guns and picked up tools to help with local production through planting rubber, coffee and forests.

If a war erupts, these serviced men will be the first to pick up their guns again and defend the nation.

This is how national defense and economic activities can come together.

Given the open, market-driven economy of Vietnam, the military must maintain its production and business in line with these characteristics.

This explains the establishment of military-run corporations and companies.

Without adequate management, however, strict oversight and regular inspection, it is easy for corruption to occur in these military-run enterprises.

The military acknowledges that it must prevent this. No business is allowed to break the law and any military-run enterprise is no exception.

*To ensure that the military will only operate in the ‘defense business,’ will the number of military-run companies be reduced in the future?

The military will maintain all businesses that directly fulfill the national defense role – manufacturing weaponry, developing defense technology, protecting the country’s sovereignty in the East Vietnam Sea, our other seas, islands and borders.

Enterprises engaging in dual-purpose economic activity will also be maintained and there will be no military-run companies that merely practice business with no strategic national defense role.

We used to have hundreds of military-run enterprises of all kinds, and this number has gradually gone down. We now have 88 such companies and are determined to have only 17 military-run businesses in the future.

These 17 companies are all major firms with dual-purpose operations including Viettel, the Saigon New Port Corporation and the Vietnam Helicopter Corporation.

But the 17 firm mark is not inflexible. If needed, the military can increase or lower the number of firms under its management.